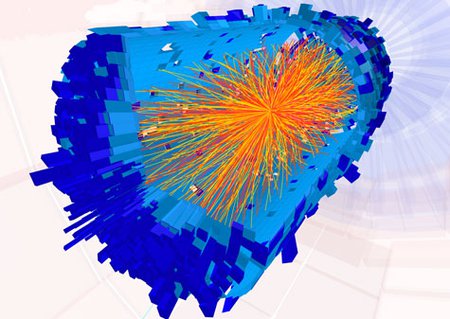 A computer reconstruction of the very first collisions between lead nuclei traveling at nearly the speed of light inside the Large Hadron Collider. Credit: Copyright CERN.
Tags:
astronomy & physics

The world's most expensive peashooter, the Large Hadron Collider (LHC), is now chewing on meatier payloads. Last week, the giant proton accelerator successfully transitioned to lead nuclei—over two hundred times as massive as the hydrogen nuclei that made up its previous diet.

Home to thousands of scientists and engineers, the LHC straddles the France-Switzerland border and is operated by CERN (the European Organization for Nuclear Research). Its main ring, over eight kilometers in diameter, spins particles at nearly the speed of light before sending them headlong into one another. The process, according to a well-known analogy, is like divining how a Swiss watch works by smashing two of them together and sifting through the rubble.

Then again, if the watches are aimed just right, they might possibly fuse into one giant superwatch. Imagine, says Caltech associate professor of physics Maria Spiropulu, driving two Mini Coopers into each other and producing not a shower of car parts nor a mass of twisted metal but a Tesla Roadster. The supervehicle she yearns to produce is the hypothetical Higgs boson.

Alas, once created, the Higgs boson will likely disintegrate quickly, and Spiropulu expects to recognize it only by its footprint: a shower of particles streaming out at distinctive angles and energies. Capturing that faint "signature" and extracting it from the background noise is the job of the electromagnetic calorimeter, a high-precision detector developed under the leadership of Caltech physics professor Harvey Newman. The device is also being used in the study of supersymmetry, dark matter, and extra spatial dimensions. Its performance has exceeded all Newman's expectations: "Anytime you begin investigating particle physics in a new energy range, you're always pessimistic, even cynical, about what you may encounter. But the patterns we've been seeing are pretty much as predicted. The method works—it really works."

This is not surprising, considering Caltech's domination in LHC research and development. Specific areas of Institute leadership include particle signatures, jets emanating from newborn quarks, and missing energy—energy not accounted for by any model. The fact that many of these exotica still await detection doesn't daunt Newman at all: in high-energy physics, he explains, not finding anything can be just as world-rocking as finding something. "Scientists talk about three levels of significance: exclusion, observation, and discovery," he says. "Exclusion doesn't guarantee that something can never happen; it just means we're highly confident that it's highly unlikely."

The scientists are encouraged by how rapidly the LHC has transitioned from the observation phase to the discovery phase, after a slightly rocky start due to a dodgy solder joint. Like every engineering project, it's had its share of bugs—"We don't have a prototype," Spiropulu points out—but tweaks and adjustments have often been surprisingly elegant. In one case, individual protons were found to have strayed from the beam, knocking electrons loose from the collider walls and wreaking havoc on experiments. The MacGyver-worthy solution? A few turns of wire here and there—just enough to corral those errant particles. Insists Newman: "It's not the incident that's important; it's the quality of the team."

Caltech, as a high-profile member of that team, shepherds the LHC in realms extending far beyond particle physics and cosmology. "We've abstracted what we're doing to other areas beyond physics," notes Newman. "This kind of synthesis of information, leading to knowledge, can have broad impact. But it's not in the classical framework of what physicists do." An example is supercomputing: Torrents of LHC data reach scientists around the globe via the Worldwide LHC Computing Grid, which owes its revolutionary data transfer rates to networking advances made by Caltech's prize-winning HEP Tier2 and MonALISA groups. Thus, while formerly it might have taken months or even years for experiments to achieve sufficient repeatability, LHC researchers are finding themselves scrambling to publish before newer, better results eclipse their data.

For her part, Spiropulu is focusing on the problem of determining the genesis of particles by teasing apart the complex superpositions of multiple signals. "Mapping any result back to the landscape of possible models requires very careful, formal treatment," she cautions, "especially given the large number of conflicting theories and models. You always risk misinterpreting as a discovery something that's actually only a guess." To attack that thorny issue, she's enlisted the help of students; this past summer, she mentored thirteen undergrads and one prefrosh. "We're happy that the undergrads show such great interest," she says. "They're the generation that will take the LHC into the future." Counters Newman: "Today's high-schoolers are too old. The PhDs who will run the next-generation collider are being born now."

As the first year of LHC operation draws to a close, both scientists remain sanguine. "If you'd asked me a year ago," says Newman, "I would've guessed that there'd be something about the detector we couldn't quite understand. When I mentioned that recently, a student asked meekly, 'Does this mean we're spoiled?' I said, 'Yes! You're very, very spoiled!'"