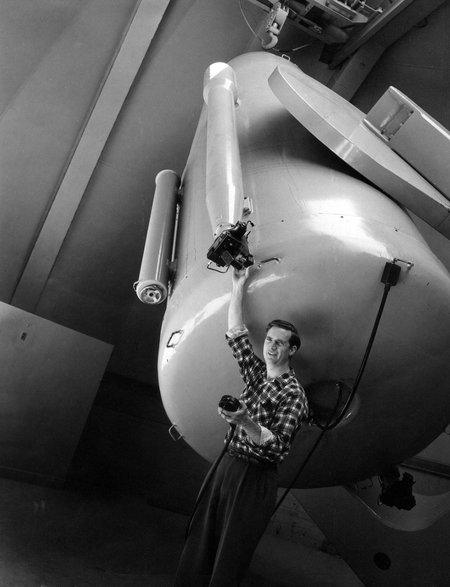 Astronomer George Abell (1927-1983), a Caltech alumnus and former UCLA professor, at the 48-inch telescope at Palomar. Abell made several discoveries as part of the first Palomar Observatory Sky Survey, or POSS I, which took place from 1949 to 1958. Credit: Caltech Archives 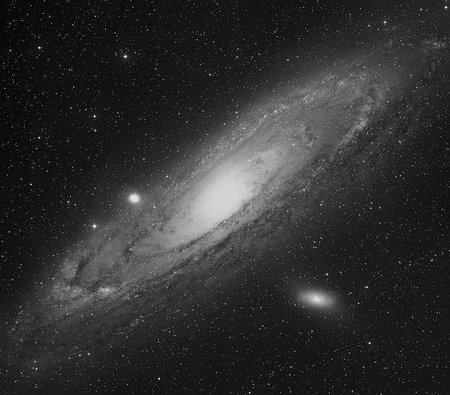 A picture of the Andromeda galaxy, taken by the 48-inch telescope at Palomar. The photo is not the telescope's "first-light" image, but was taken during the first Palomar Observatory Sky Survey, or POSS I, which took place from 1949 to 1958. Credit: POSS I/Caltech 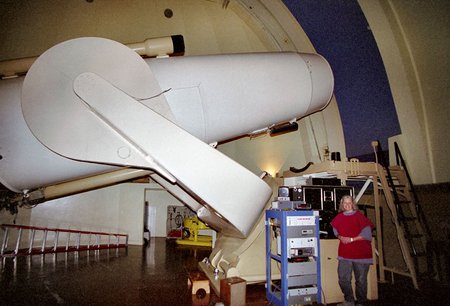 One of the first pictures taken by the Samuel Oschin Telescope at Palomar, back when it opened 70 years ago, was of our nearest large neighboring galaxy, Andromeda. The photo, which showed the entirety of the spiral galaxy with its intricate lanes of dust and luminous stellar glow, was one of the best ever taken at that time. In the past, astronomers typically had to stitch together views of Andromeda from individual frames, but with the new Samuel Oschin Telescope, then known as the "48-inch," scientists could take wide-field pictures and capture all of Andromeda in one shot.

To celebrate the 70th anniversary of the telescope—which saw "first light" in late September of 1948—the Palomar team has put together a new 360-degree online tour of the telescope's dome. Viewers can scroll around the dome and learn about its various components, such as its finderscopes for guiding the main telescope, and they can watch videos of the telescope tube moving into position.

"When the 48-inch opened, astronomers could survey all of the Andromeda system and take in a deep panoramic view for the first time," says Andy Boden, deputy director of the Palomar Observatory. "The telescope lets astronomers do a broad reconnaissance of the sky rather than detailed studies. It helps one find new and interesting objects, which can then be studied in detail with other telescopes, such as the 60-inch and 200-inch Hale telescopes at Palomar."

Today, the Samuel Oschin Telescope is still a workhorse in astronomy. Its newest instrument, the Zwicky Transient Facility (ZTF), saw first light in November 2017. ZTF is scanning the entire northern sky every three nights, discovering objects that erupt or vary in brightness, including exploding stars (also known as supernovas), stars being munched on by black holes, and asteroids and comets. ZTF is funded by the National Science Foundation (NSF) and a collaboration of several other partners.

A New Way to Observe the Skies

The 48-inch telescope opened the same year as Palomar's 200-inch Hale Telescope, which was developed by George Ellery Hale—one of the founders of Caltech who built the world's largest telescope four times in a row, culminating with the 200-inch. Hale secured funding for the 200-inch in 1928, but the telescope would not be completed until 1948, 10 years after his death.

During the period the Hale Telescope was under construction, other astronomers saw the benefit of smaller telescopes that could survey the sky to find interesting targets for the larger Hale Telescope. They wanted to build so-called Schmidt telescopes, named after German optician Bernard Schmidt, which can image large portions of the sky on a single photographic plate. Caltech's Fritz Zwicky, the namesake of ZTF, and Walter Baade of Mount Wilson convinced Hale of the need to help fund such a telescope, and, after building an 18-inch Schmidt telescope at Palomar, they would go on to advocate for and develop the 48-inch, also a Schmidt telescope.

"This idea—surveying the sky with dedicated smaller telescopes and following up the interesting objects with a large telescope—is still very effective today," says George Djorgovski, professor of astronomy and executive officer for astronomy at Caltech.

From Sky Surveys to Pluto's Demise

Jean Mueller, a retired telescope operator who worked for nearly 30 years at Palomar, recalls what it was like to work on the POSS II survey. "It was hard physical work, hauling boxes of photographic plates around and running up and down a lot of stairs, but I would do it all over again," she says.

She worked the night shift and, using only the dim perimeter lights on the observing floor, would swap in photographic plates into a plate loader in the telescope tube. After exposing the plates, she would load them onto a dumbwaiter, where they were lowered down to a darkroom and developed. In her spare time, Mueller discovered more than 100 supernovas and more than two dozen comets and asteroids.

"The idea was to create a giant roadmap to the sky," says Mueller.

Each photographic plate covered an area of sky equivalent to the bowl in the Big Dipper, and, ultimately, about 4,700 plates were needed during the POSS II survey to photograph the whole northern sky.

The POSS surveys also discovered thousands of galaxy clusters—the largest gravitationally bound structures in the universe. In addition to being fundamental building blocks on cosmic scales, many of these same clusters are also used as gravitational magnifying lenses that make the farthest known galaxies in the universe easier to see. The surveys also led to a catalog of stars that NASA's Hubble Space Telescope pointed at for further study.

Perhaps one of the most well-known discoveries by the 48-inch—renamed the Samuel Oschin Telescope in 1987—is that of Eris, a comet-like body about as massive as Pluto, orbiting in the fringes of our solar system. The discovery of Eris in 2005 by Mike Brown, Caltech's Richard and Barbara Rosenberg Professor of Planetary Astronomy, would ultimately lead to the demotion of Pluto from a planet to a dwarf planet.

A list of all the surveys by the Samuel Oschin Telescope, including the Palomar Transient Factory, the predecessor to ZTF, is online at: http://www.astro.caltech.edu/palomar/about/telescopes/oschin.html.

Since 2000, the 48-inch telescope has been operated robotically, and its images are taken by modern digital detectors. For example, the fully digital Palomar-Quest survey produced the Big Picture exhibit at the Griffith Observatory and pioneered the automated classification of variable objects in the sky. The large amounts of data acquired by the telescope are managed by a microwave network managed by UC San Diego. At present, the network is sending 4 terabytes of ZTF data each night to IPAC, an astronomy center at Caltech that processes and archives the data, making them available to astronomers around the world.

"The 48-inch really pioneered the modern sky surveys," says Djorgovski. "Sky surveys are now the dominant data sources in astronomy, making it a 'big data' science, and their analyses involves machine learning and other cutting-edge technologies."

Gone are the days of hauling around photographic plates. Mueller recalls that it took 15 years to complete the second big sky survey at Palomar. "Now ZTF can do the whole northern sky in three nights," she says. "That blows me away."