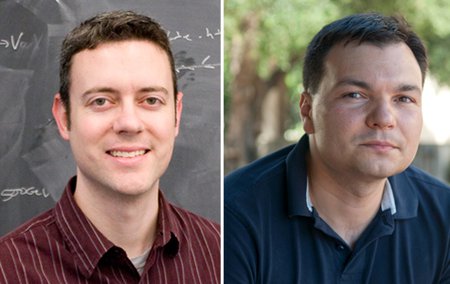 Ryan Patterson is no stranger to Caltech. As an undergraduate, the Mississippi native studied physics, devoting a good part of his last two years to doing research with Professor of Physics Brad Filippone, building an electron gun to help calibrate an experiment that analyzed the decay of ultracold neutrons. "It was a lot of fun," Patterson recalls.

After graduating in 2000, Patterson got his PhD in physics at Princeton, where he studied the elusive neutrino, a nearly massless particle that zips around at almost the speed of light. He returned to Caltech as a postdoctoral scholar in 2007, and, in 2010, joined the faculty of the Division of Physics, Mathematics and Astronomy as an assistant professor. His work and day-to-day life as a professor at Caltech is an entirely new experience, he says: "It's completely different. It doesn't even really feel like the same place."

Patterson's research focuses on the mysterious nature of the neutrino. Produced in nuclear reactions—such as in stars or in nuclear power plants—neutrinos hardly interact with anything. In fact, billions of them are harmlessly surging through your body this very second.

Most of Patterson's attention is now centered on NOvA, a new neutrino experiment that's scheduled to start running in 2013. NOvA will measure so-called muon neutrinos that are being produced at Fermilab near Chicago. One of its main goals is to learn if the muon neutrinos are turning into another type called electron neutrinos. Measuring how many of these transformations take place—if at all—will help physicists determine a parameter called the mixing angle. Knowing this number is key to some of the big fundamental questions in physics, such as why the universe is full of matter instead of antimatter.

According to current theory, the big bang should have created equal amounts of matter and antimatter. But when the two interact, they annihilate each other and produce energy, meaning that stars, planets, and us—all made out of ordinary matter—shouldn't exist. And since we do exist, there somehow must have been a bit more matter than antimatter at the beginning. "We should've all been annihilated at the beginning of the universe," Patterson says. "Neutrinos may hold the key as to why that asymmetry is there, and we're trying to understand that."

Vladimir Markovic comes to Caltech from the University of Warwick, where he was on the mathematics faculty for 10 years. He also spent time as an associate professor at SUNY Stony Brook. Having just arrived in Pasadena in August, the professor of mathematics is the newest member of the PMA faculty.

Markovic studies the shapes and structures of mathematical spaces called manifolds. (For example, a line is a one-dimensional manifold while a plane is a two-dimensional one.) For the mathematically minded, he's an expert in low-dimensional geometry and Teichmüller theory. In particular, he has worked with something called the "good pants homology," which involves a mathematical object with three holes that has the same topological properties as a pair of pants, which has a hole for the waist and two for the legs. He combines these structures, mathematically stitching the pants together at their holes to create new structures. For example, attaching two pairs of pants at their waists would result in a new structure with four holes (the four legs). "You can say that what I do for a living is gluing pants," Markovic quips. Gluing more and more pants together produces increasingly complicated surfaces, and his goal is to understand the properties of those surfaces.

Born in Germany, Markovic studied mathematics at the University of Belgrade, receiving his PhD in 1998. Math was one of his two passions in school; soccer was the other. Mathematics, he says, is also about competition—it's about seeking new challenges in much the same way that mountain climbers want to scale higher and higher peaks. "I like solving problems. It's really the big draw for me, and it's still what excites me."