Peering Into the Heart of a Supernova 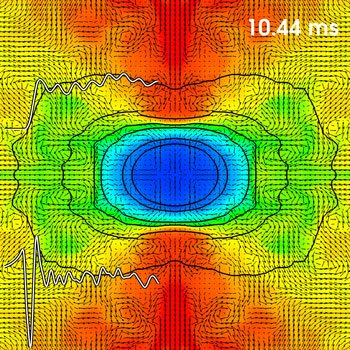 PASADENA, Calif.—Each century, about two massive stars in our own galaxy explode, producing magnificent supernovae. These stellar explosions send fundamental, uncharged particles called neutrinos streaming our way and generate ripples called gravitational waves in the fabric of space-time. Scientists are waiting for the neutrinos and gravitational waves from about 1,000 supernovae that have already exploded at distant locations in the Milky Way to reach us. Here on Earth, large, sensitive neutrino and gravitational-wave detectors have the ability to detect these respective signals, which will provide information about what happens in the core of collapsing massive stars just before they explode.

If we are to understand that data, however, scientists will need to know in advance how to interpret the information the detectors collect. To that end, researchers at the California Institute of Technology (Caltech) have found via computer simulation what they believe will be an unmistakable signature of a feature of such an event: if the interior of the dying star is spinning rapidly just before it explodes, the emitted neutrino and gravitational-wave signals will oscillate together at the same frequency.

"We saw this correlation in the results from our simulations and were completely surprised," says Christian Ott, an assistant professor of theoretical astrophysics at Caltech and the lead author on a paper describing the correlation, which appears in the current issue of the journal Physical Review D. "In the gravitational-wave signal alone, you get this oscillation even at slow rotation. But if the star is very rapidly spinning, you see the oscillation in the neutrinos and in the gravitational waves, which very clearly proves that the star was spinning quickly—that's your smoking-gun evidence."

Scientists do not yet know all the details that lead a massive star—one that is at least 10 times as massive as the Sun—to become a supernova. What they do know (which was first hypothesized by Caltech astronomer Fritz Zwicky and his colleague Walter Baade in 1934) is that when such a star runs out of fuel, it can no longer support itself against gravity's pull, and the star begins to collapse in upon itself, forming what is called a proto-neutron star. They also now know that another force, called the strong nuclear force, takes over and leads to the formation of a shock wave that begins to tear the stellar core apart. But this shock wave is not energetic enough to completely explode the star; it stalls part way through its destructive work.

There needs to be some mechanism—what scientists refer to as the "supernova mechanism"—that completes the explosion. But what could revive the shock? Current theory suggests several possibilities. Neutrinos could do the trick if they were absorbed just below the shock, re-energizing it. The proto-neutron star could also rotate rapidly enough, like a dynamo, to produce a magnetic field that could force the star's material into an energetic outflow, called a jet, through its poles, thereby reviving the shock and leading to explosion. It could also be a combination of these or other effects. The new correlation Ott's team has identified provides a way of determining whether the core's spin rate played a role in creating any detected supernova.

It would be difficult to glean such information from observations using a telescope, for example, because those provide only information from the surface of the star, not its interior. Neutrinos and gravitational waves, on the other hand, are emitted from inside the stellar core and barely interact with other particles as they zip through space at the speed of light. That means they carry unaltered information about the core with them.

The ability neutrinos have to pass through matter, interacting only ever so weakly, also makes them notoriously difficult to detect. Nonetheless, neutrinos have been detected: twenty neutrinos from Supernova 1987a in the Large Magellanic Cloud were detected in February 1987. If a supernova went off in the Milky Way, it is estimated that current neutrino detectors would be able to pick up about 10,000 neutrinos. In addition, scientists and engineers now have detectors—such as the Laser Interferometer Gravitational-Wave Observatory, or LIGO, a collaborative project supported by the National Science Foundation and managed by Caltech and MIT—in place to detect and measure gravitational waves for the first time.

Ott's team happened across the correlation between the neutrino signal and the gravitational-wave signal when looking at data from a recent simulation. Previous simulations focusing on the gravitational-wave signal had not included the effect of neutrinos after the formation of a proto-neutron star. This time around, they wanted to look into that effect.

Future simulation studies will look in a more fine-grained way at the range of rotation rates over which the correlated oscillations between the neutrino signal and the gravitational-wave signal occur. Hannah Klion, a Caltech undergraduate student who recently completed her freshman year, will conduct that research this summer as a Summer Undergraduate Research Fellowship (SURF) student in Ott's group. When the next nearby supernova occurs, the results could help scientists elucidate what happens in the moments right before a collapsed stellar core explodes.

Most of the computations were completed on the Zwicky Cluster in the Caltech Center for Advanced Computing Research. Ott built the cluster with a grant from the National Science Foundation. It is supported by the Sherman Fairchild Foundation.