Peering Through the Intergalactic Dust

Caltech Builds a New Submillimeter Telescope in the Atacama Desert 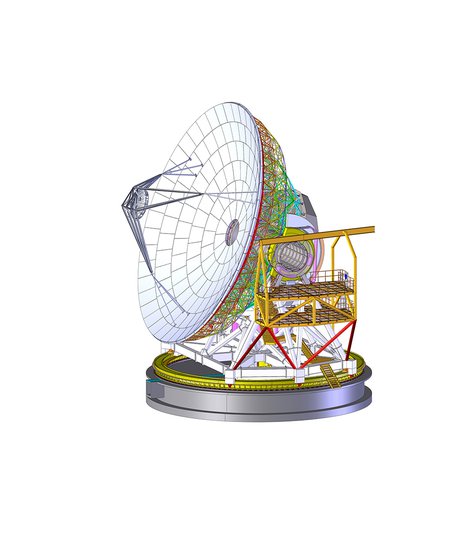 Where do you go to look at the stars? Away from city lights, certainly. But if you're serious about peering far out into space, to the observable edges of our universe, at submillimeter wavelengths, you have to do a little better than that. You have to go farther and higher, up to where the atmosphere is thin. And if you want to look at the stars for more than a few nights a year, you also need some place that is very, very dry. Clouds, of course, obstruct the view of stars and galaxies, but even water vapor in the atmosphere can interfere with incoming electromagnetic radiation.

One of the most hospitable places for astronomy is also among the least hospitable for human life: the Atacama Desert in northern Chile, at high elevations. The Atacama is the driest desert on Earth, receiving perhaps a half an inch of rain each year (and in some locations, none at all). Because the region has been arid for so long, its mountain peaks rarely have glaciers or permanent snow coverage. The desert extends from the sea up toward the highest western ridge of the Andes. Even at the coast, the human population is sparse. But the very best conditions for submillimeter astronomy are found higher up.

The summit of Cerro Chajnantor, at an altitude of 5,617 meters (nearly 18,500 feet), is the proposed site for a new telescope known only by an acronym: CCAT. CCAT is a 25-meter telescope that observes electromagnetic radiation at wavelengths a little shorter than a millimeter—that is, wavelengths a thousand times longer than optical light. Because water vapor so strongly absorbs submillimeter-wave radiation, the ultradry Atacama Desert has been the go-to location for submillimeter telescopes for several decades. Indeed, from its perch on Cerro Chajnantor, the future CCAT will look down on a veritable forest of telescopes on the plateau some 600 meters below. To the northwest, the Atacama Pathfinder Experiment (APEX) and Atacama Cosmology Telescope (ACT) are visible; to the east are the Japanese Atacama Submillimeter Telescope Experiment (ASTE) and NANTEN telescopes; immediately below are the 66 telescopes in the Atacama Large Millimeter/submillimeter Array (ALMA).

So why truck up an extra 600 meters above the plateau in a cold, uninviting landscape over a rough dirt road to build CCAT? Surprisingly, the even thinner, drier air at the summit buys scientists a 1.4-fold increase in sensitivity over telescopes located on the plateau. It is "the driest high-altitude site to which one can drive a truck," says Riccardo Giovanelli, project director for CCAT.

The electromagnetic radiation that reaches us on Earth in the visible range of the light spectrum has always fascinated humans, because we can see it with our own eyes, or with the enhanced eye of an optical telescope. But electromagnetic radiation that comes to Earth at longer wavelengths has its own stories to tell about the universe. Most of the radiation emitted by stars falls in the ultraviolet (UV) and optical range, and can be detected by a traditional optical telescope (provided the telescope is sensitive enough). But in dusty clouds, where stars most often form, newborn stars are obscured and become invisible to an optical telescope. Fortunately, however, this UV and optical radiation from the new stars heats up the dust. The dust absorbs the star's UV and optical radiation, and reemits it into the universe at longer submillimeter wavelengths. By measuring the submillimeter radiation from the clouds, astronomers can learn about the stars that are hidden within.

There is widespread agreement in the scientific community that it is urgent to move forward with CCAT. In its 2010 Astronomy and Astrophysics Decadal Survey, the National Research Council of the National Academy of Sciences urged CCAT "to progress promptly to the next step in its development because of its strong science case … and its readiness." CCAT is drawing toward the close of its design phase. Construction should begin in 2014; first light—that is, the first scientific use of the instrument—is scheduled for 2019.

Lead engineer on the CCAT project is Stephen Padin, senior research associate in astrophysics at Caltech. According to Tom Soifer, chair of Caltech's Division of Physics, Mathematics, and Astronomy, Padin is "the only person on Earth with the experience and brilliance to build CCAT." During Padin's decades-long career as a vagabond telescope builder, he has helped to design and construct Antarctica's South Pole Telescope and the radio dishes that comprise the Owens Valley Radio Observatory. But the Atacama Desert, where Padin engineered the Cosmic Background Imager (CBI) telescope for Caltech 20 years ago, has a special allure for him. "It looks just like pictures of the martian surface," Padin says, "except the sky is a deep blue above the desert, while it is orange on Mars." Padin remembers one night on-site in Chile looking through a 6-inch refracting telescope while taking some measurements to adjust the CBI's pointing mechanism: "The view was astounding. Sharp, bright, and with a snap that no picture on a page or computer screen could ever hope to achieve."

At 25 meters in diameter, the CCAT telescope is substantially larger than both the next-largest submillimeter telescope, the 15-meter James Clerk Maxwell Telescope (JCMT) atop Hawaii's Mauna Kea, and the Herschel Space Observatory, which is a mere 3.5 meters in diameter. Like JCMT, CCAT will have a segmented mirror constructed of machined aluminum, a material that is lightweight and very reflective. The structure supporting the mirror will be built of carbon-fiber-reinforced plastic, which is light, stiff, and stable. Submillimeter telescopes are at a bit of an advantage over optical telescopes when it comes to procuring the necessary materials. Because telescopes like CCAT are designed to detect longer wavelengths of electromagnetic radiation, they can tolerate a somewhat rougher surface than optical telescopes. Optical telescopes must have a glass mirror and a steel structure to support that weight, while submillimeter telescopes can be constructed of lighter, less expensive materials.

To construct the mirror, the aluminum segments must be carefully machined and then accurately mounted on the support structure. Then the telescope must be installed on Cerro Chajnantor, which, at present, can only be reached via a road that is narrow, steep, and winding. To get to the top, says Padin, "you'll have to stop and roll a few boulders out of the way." Although the existing road will be widened before CCAT is installed, it will never be paved. (However, Padin notes, the Cerro Chajnantor road will be "a considerable improvement over access to Mount Wilson when the 60-inch reflecting telescope was built. Many of those parts were hauled up by mule teams.")

"The main issues for the CCAT site are that it's remote, and people can't breathe up there," Padin says. "Remote is always a problem for projects in astronomy, because you've got to get a lot of high-technology stuff to the middle of nowhere and then make it work. But in this case, you also have to factor in the effects of the altitude. People don't think very well at 18,500 feet." Indeed, the site is halfway to the altitude of a typical passenger airplane, and that means workers will be breathing in only about half the oxygen they would take in at sea level. To offset the effects of the altitude, workers will be required to use supplementary oxygen.

Leveling the site and producing an enclosure for CCAT will be handled by local Chilean companies, while scientific instruments and the pieces of the telescope itself—approximately 500 metric tons of equipment being developed and built all over the world—will be shipped in by sea. Then the entire telescope will be put together "at lower altitude," Padin explains, "where the scientists can think." At this stage, the team will verify that all of the components fit together properly and fix any minor problems. "It's embarrassing if you get on top of the mountain with a big pile of bits that don't fit," Padin says. After this test assembly, CCAT will be dismantled and trucked up to the summit of Cerro Chajnantor where it will be assembled for a second time.

Following construction, CCAT will be a fully automated observatory. In principle, says Padin, "you'll be able to sit at home with your laptop and drive the telescope." Except when problems arise or maintenance is required, the site will be uninhabited when CCAT is making observations. Padin laments the loss of "one of the big attractions for astronomy: traveling to exotic places and doing strange things in the middle of the night." Still, he admits, going to a mountain in the Atacama Desert "is fun the first time," but it becomes "less appealing as time goes on."

By peering into the submillimeter, CCAT will give us new eyes on the universe and help to resolve some pressing questions about star and galaxy formation. As Padin explains, "Astronomy is in an interesting position at the moment. We know a lot about the nearby stuff. We've spent hundreds of years looking at that at optical wavelengths. And now we actually know quite a bit about cosmology from measuring the microwave background left behind by the Big Bang. We know less about what happened in the middle, about the first stars turning on, the first galaxies forming. What happened between the smooth Big Bang and the very lumpy structure that we see now? This is the question that the next generation of telescopes, including CCAT, promises to address."