A Powerful New Astronomy Instrument Gets Ready for Hawaii 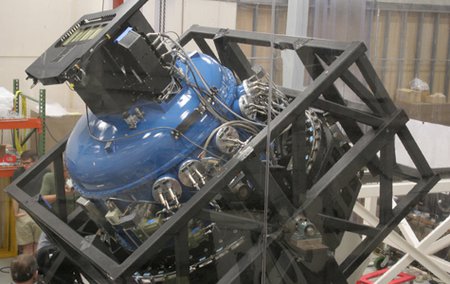 It's time to go to Hawaii—at least, if you're MOSFIRE, a new near-infrared spectrometer that's now on its way to the W. M. Keck Observatory, atop Mauna Kea. But the powerful new instrument, six feet in diameter, about a dozen feet in length, and weighing in at 4,500 pounds—10,000 if you include the mount and packing crate—isn't going there to surf. MOSFIRE, which stands for multi-object spectrometer for infrared exploration, will be the newest weapon in the Keck's arsenal to survey the cosmos, helping astronomers learn about star formation, galaxy formation, and the early universe.

It's taken seven years to design and build MOSFIRE, which has made its home in the synchrotron high-bay facility at the southern edge of campus. Today, it's scheduled to leave Caltech for good and head to San Diego. There, it will board a boat on February 8 and cruise to Hilo, where it will be trucked up almost 14,000 feet to the peak of Mauna Kea.

MOSFIRE will take spectra—the chemical signatures of everything from stars to galaxies—at near-infrared wavelengths (0.97-2.45 microns, or millionths of a meter), which are just a bit longer than the light our eyes can see. Observing in the infrared allows researchers to probe stars and galaxies that are obscured in clouds of dust, as well as the most distant objects whose spectra have been shifted beyond optical wavelengths by the expansion of the universe. What sets MOSFIRE apart from other instruments is its superior sensitivity and ability to survey up to 46 objects at the same time.

"There are only two or three instruments in the world that do something similar, but none are as sensitive and none are on telescopes as big as Keck's," says Chuck Steidel, the Lee A. DuBridge Professor of Astronomy at Caltech, and MOSFIRE's co-principal investigator. Steidel anticipates that MOSFIRE will be one of the Keck's workhorse instruments, used for about half of all telescope time. "It's opening up a whole new area of study," he says.

The instrument can scan the sky with a 6.1 arc minute field of view, which is about 20 percent of a full moon and nearly 100 times bigger than the Keck's current near-infrared camera. To take spectra of multiple objects, the state-of-the-art spectrometer consists of 46 pairs of sliding bars that open and close like curtains. Aligned in rows, each pair of bars blocks most of the sky, leaving a small slit between the bars that allows a sliver of light from the targeted object to leak through. Light from each slit then enters the spectrometer, which breaks down the object's light into its spectrum of wavelengths.

With its multiple-object capability, the new tool will make research in near-infrared spectroscopy many times more efficient than before. "I reckon that MOSFIRE will observe very faint targets more than a hundred times faster than has ever been possible," says Steidel, who does research on galaxy formation and observational cosmology. "All the observations that my group and I have done in near-infrared spectroscopy with Keck over the last ten years could be done in just one night with MOSFIRE."

Because everything that's even somewhat warm radiates in the infrared, all infrared instruments must be kept cold to prevent any trace of heat from the ground, the telescope, or the instrument itself from messing up the signal you're trying to detect. MOSFIRE is kept at a cool 120 kelvins (about -243 degrees Fahrenheit or -153 degrees Celsius), and will be the largest cryogenic instrument on the Keck telescopes.

Astronomers will use MOSFIRE to study the epoch of galaxy formation, as well as the so-called period of reionization, when the universe was just a half-billion to a billion years old. During this time, galaxies and quasars—objects consisting of huge black holes that spew enormous amounts of energy as they consume gas and dust—first turned on, shining brightly and ionizing the neutral gas between galaxies for the first time since the universe was only about 380,000 years old. The instrument will also be used to investigate nearby stars, young stars, how stars formed, and even brown dwarfs, which are stars not quite massive enough for nuclear fusion to ignite in their cores.

MOSFIRE will also allow astronomers to do riskier—but more scientifically rewarding—research, Steidel says. Taking the spectrum of single a star or galaxy involves precious telescope time and resources. But because MOSFIRE can observe many objects at once, astronomers can afford to take extremely long exposures. Otherwise, such long exposures of single targets would be too costly.

"I'm definitely ready to do science," says Steidel, whose graduate students have planned their PhD theses around MOSFIRE. "I learned a huge amount working on the instrument, and it has been a lot of fun, but my eye has always been on what we can do with it." No one's sure what astronomers will discover, but therein lies the excitement, he says. "Sometimes serendipity is the most interesting thing that happens."

In addition to Steidel, MOSFIRE is led by co-principal investigator Ian McLean of UCLA. Caltech's Keith Matthews, who has built two previous Keck instruments, plays a leading role as chief instrument scientist. The team includes the engineering and technical staff of the Caltech Optical Observatories, the technical staff of the UCLA Infrared Lab, staff from the W. M. Keck Observatory, and optical designer Harland Epps of UC Santa Cruz. MOSFIRE was supported by the National Science Foundation and a gift from Gordon and Betty Moore.