Probing the Transforming World of Neutrinos 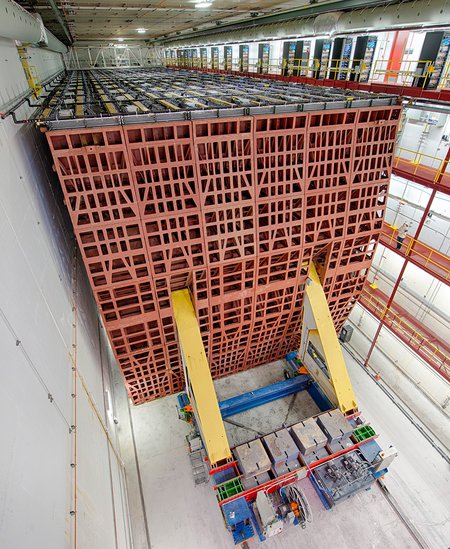 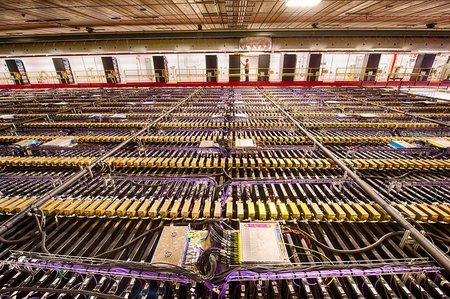 The NOvA detector measures 50 feet by 50 feet by 200 feet, and the top surface of the detector as shown here is covered with readout and monitoring systems. Each gold-colored box in the image contains a photodiode array, cooling components, and associated electronics to detect light from 32 of the 344,000 cells that make up the detector. Credit: Reidar Hahn/Fermilab
Tags:
astronomy & physics

Every second, trillions of neutrinos travel through your body unnoticed. Neutrinos are among the most abundant particles in the universe, but they are difficult to study because they very rarely interact with matter. To find traces of these elusive particles, researchers from Caltech have collaborated with 39 other institutions to build a 14,000-ton detector the size of two basketball courts called NuMI Off-Axis Electron Neutrino Appearance, or NOvA. The experiment, located in northern Minnesota, began full operation in November 2014 and published its first results in Physical Review Letters this month.

The experiment aims to observe neutrino oscillations—or the conversion of one type of neutrino into another—to learn about the subatomic composition of the universe. There are three different types, or "flavors," of neutrinos—muon-, tau-, and electron-type. The NOvA experiment has made successful detections of the transformation of muon-type neutrinos into electron-type neutrinos. Discovering more about the frequency and nature of neutrino oscillations is an important step to determining the masses of different types of neutrinos, a crucial unknown component in every cosmological model of the universe.

Though neutrinos rarely interact with matter, one in every 10 billion neutrinos that passes through the detector will interact with an atom in the detector. To observe these collisions, a beam of neutrinos 500 miles away at Fermilab in Chicago is fired every 1.3 seconds in a 10-microsecond burst at the detector. The detector is made up of 344,000 cells, each like a pixel in a camera and each filled with a liquid scintillator, a chemical that emits light when electrically charged particles pass through it. When a neutrino smashes into an atom of this liquid—an event estimated to happen once for every 10 billion neutrinos that pass through—it produces a distinctive spray of particles, such as electrons, muons, or protons. When these particles pass through a cell, fluorescent chemicals light up the cell, allowing scientists can track the paths of the particles from the collision. 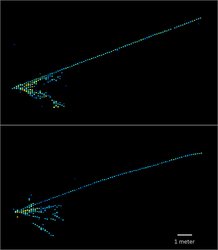 "Each type of neutrino leaves a particular signature when it interacts in the detector," says Ryan Patterson (BS '00), an assistant professor of physics and the leader of NOvA's data-analysis team. "Fermilab makes a stream of almost exclusively muon-type neutrinos. If one of these hits something in our detector, we will see the signatures of a particle called a muon. However, if an electron-type neutrino interacts in our detector, we see the signatures of an electron."

"We see a large rate for this transition, much higher than it needed to be, given our current knowledge," Patterson says. "These initial data are giving us exciting clues already about the spectrum of neutrino masses."

The Caltech NOvA team led the research and development on the detector elements. The goal was to make each detector cell sensitive enough to identify the faint particle signals over background noise. The team designed the individual detector elements to operate at -15 degrees Celsius to keep noise—aberrant vibrations and other signals in the data—at a minimum, and also built structures to remove the condensation that can occur at such low temperatures. By the end of construction in 2014, all 12,000 detector arrays, each serving 32 cells, had been built at Caltech.

"The spatial resolution on a detector of this size is unprecedented," Patterson says. "The whole detector is highly 'active'—which means that most of it is actually capable of detecting particles. We have tried to minimize the amount of 'dead' material, like support structures. Additionally, although the different types of neutrinos leave different signatures, these signatures can look similar—so we need as much discrimination power as we can get."

Discovering more about the nature of neutrino oscillations gives important insights into the subatomic world and the evolution of the universe.

"We know that two of the neutrinos are similar in mass, and that a third has a rather different mass from the other two. But we still do not know whether this separated mass is larger or smaller than the other two," Patterson says. Through precise study of neutrino oscillations with NOvA, researchers hope to solve this mass-ordering mystery. "The neutrino mass ordering has connections throughout physics, from the growth of structure in the universe to the behavior of particles at inaccessibly high energies," he says, with NOvA unique among operating experiments because of its sensitivity to this mass ordering.

In the future, researchers at NOvA plan to determine if antineutrinos oscillate at the same rate as neutrinos—that is, to see if neutrinos and antineutrinos behave symmetrically. If NOvA finds that they do not, this discovery could, in turn, help reveal why today the amount of matter in the universe is so much greater than the amount of antimatter, whereas in the early universe, the proportions of the two were balanced.

"These first results demonstrate that NOvA is operating beautifully and that we have a rich physics program ahead of us," Patterson says.