Put a Seismometer in Your Living Room 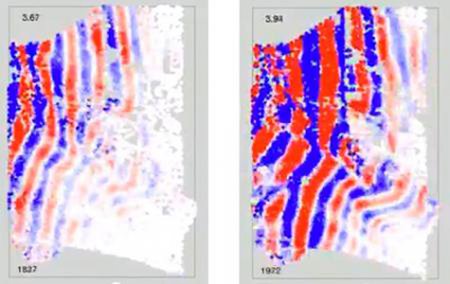 Back in the 1960s, Charlie Richter (PhD '28) installed a seismometer in his living room. It was bigger than his TV set, and it didn't go with the sofa, but it saved him a lot of late-night drives into the Seismo Lab and was a great conversation piece. Now, if you live in the Pasadena area, you can have one, too. Professor of geophysics Robert Clayton will send a wallet-sized seismometer to the first 1,000 volunteers with an Internet connection and a spare USB port. There is one small catch: you have to promise to leave your computer on 24/7.

Even as you impress your friends by creating your own mini-quakes ("we encourage people to test the unit by jumping up and down," Clayton says with a grin), you'll be contributing to a serious civic project—creating block-by-block earthquake-intensity maps that can guide ambulances and fire trucks to hard-hit areas almost while the ground is still rolling. Ordinary seismic data won't do; as we learned in the 1994 Northridge earthquake, heavy damage can strike far from the epicenter.

Crowd-sourced seismology dates to the turn of the millennium, when David Wald (PhD '93), Vincent Quitoriano (BS '99), and Humboldt State's Lori Dengler created an online questionnaire called "Did You Feel It?" The site went viral with the magnitude 7.1 Hector Mine quake, and now even a shaker in the 4 to 5 range will generate some 50,000 responses. The first thing people do—we hope!—is take cover," Clayton says. "But the second thing they do, apparently, is log on and file a report. So we want to put instruments where the people are."

A collaboration between Caltech's seismology, earthquake engineering, and computer science departments, the Community Seismic Network was inspired by what Clayton calls "the densest urban array ever"—a multimillion-dollar array of 5,206 sensors, or better than one per block, that were buried under the grassy verges between the sidewalks and the streets of Long Beach and operated from January through June of 2011. The sensors were used by the Signal Hill Petroleum Company to map its holdings by analyzing how shock waves reflected off the rock formations deep underground. The preferred oil-field survey tool is a stick of dynamite, but working in a city called for a subtler approach—sort of. "They had to pull a parade permit every day," says Clayton. A train of 30-ton vibrator trucks would drive up and down the boulevards, rattling doors and windows, preceded by a police escort to clear the way.

The survey crew worked weekdays from 9:00 to 4:00, but the seismometers ran 24/7. The array straddled the Newport-Inglewood fault zone, the source of the disastrous 1933 quake that killed 115 people. "The earth is constantly chattering away down there," says Clayton, and the network caught hundreds of after-hours tremors, including a magnitude 2.4 under nearby Carson. A color-coded video of this hiccup shows the seismic waves propagating eastward block by block, station by station. The waves distort as they encounter the fault, whose segments reveal themselves as fleeting white scars in the sea of red and blue.

The cross-sectional renderings are even more revealing. Grad student Asaf Inbal projected the waveforms from an unfelt microquake back to their source in the fault plane. The resulting animation "looks like a summer lightning storm," Clayton says, but in this case, the towering cumulonimbus clouds are actually micro-slip zones, and the thunderbolts are transitory sub-centimeter displacements striking as deep as 20 kilometers underground.

Such detailed data will allow seismologists to answer "the big question," says Clayton: "How does an earthquake nucleate? Most activity simply dies out over very small distances. What lets something suddenly take off?"

Which brings us back to Pasadena. The Southern California Seismic Network, run jointly by Caltech and the U.S. Geological Survey, runs from San Luis Obispo to the Mexican border. It includes about 40 stations in the Greater Los Angeles region, or about one every 10 kilometers; each state-of-the-art installation costs $100,000. The Community Seismic Network uses mass-produced accelerometer chips like the ones in your Wii, each costing about a hundred bucks. High-end they're not. In fact, Clayton says, "no single sensor would have impressively seen any one event. But collectively, when you have 100 of them, you see it."

Given enough sensors, you can assess seismic hazards block by block, and in some cases floor by floor. Caltech's Millikan Library, for example, has sensors on each of its nine floors, plus one on the roof and one in the basement. Undergrad Hong Sheng and senior research fellow Monica Kohler (PhD '95) used that data to create a 3-D rendering of the building's response to the magnitude-4.2 Newhall quake of September 1, 2011. Watching the library's energetic hula is rather unsettling, especially if you hang out on Millikan's middle floors; fortunately, the scale is greatly exaggerated and the actual sway is less than a tenth of a millimeter. Similar animations could alert inspectors to hidden damage after a large earthquake, Clayton says. Tall buildings sway at frequencies determined by the details of their construction, so "if this frequency drops during an event and doesn't bounce back once the shaking stops, it could be a sign of broken welds. We saw this in the Northridge earthquake."

Little by little, Clayton hopes to grow the Community Seismic Network to 15,000 sensors spanning the Los Angeles basin, from the Hollywood Hills to Lake Forest in southern Orange County. But for now he just wants to fill the area bounded by the San Gabriel Mountains and the 605, 10, and 2 freeways. Be the first one on your block—sign up today!

The Community Seismic Network is funded by the Gordon and Betty Moore Foundation and by Caltech trustee Ted Jenkins (BS '65, MS '66).