Q&A: Evan Kirby on the Importance of Science Outreach

Professor of Astronomy Evan Kirby has been named a 2018 Cottrell Scholar, an award that honors teacher-scholars. 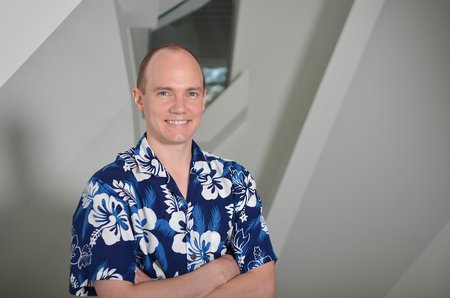 Every summer, Evan Kirby, assistant professor of astronomy at Caltech, recruits several high school students to join his research group. He assigns them independent astronomy projects, which he says allow the students to ask original questions that don't yet have answers. His students have gone on to excel in both non-science and science careers, including astronomy. One new goal of Kirby's is to get his graduate students involved in mentoring the high school students. He says that this kind of leadership experience is important for their future jobs.

For this initiative and other teaching and research proposals, Kirby has been named a 2018 Cottrell Scholar, an award that comes with a $100,000 grant and is designed to promote "outstanding teacher-scholars who are recognized by their scientific communities for the quality and innovation of their research programs and their academic leadership skills."

We sat down with Kirby to talk more about the award and his academic and teaching pursuits.

Can you tell us more about the Cottrell Scholar Award?

There are two parts to the Cottrell Award: research and teaching. Researchers submit their proposals and the winners receive unrestricted funds. For the research side of my proposal, I talked about looking at white dwarfs, the burnt-out cores of stars that exploded, and the elements created in those explosions. And, on the teaching side, I talked about using evidence-based learning to improve classroom teaching as well as wanting to get my graduate students involved in mentoring my summer high school students.

What was the research part of your Cottrell Award specifically about?

The proposal was called "Nucleosynthesis in Degenerate Objects," which is kind of a mouthful. Basically, it's related to what I study in general: the creation of the elements in the universe. For this particular proposal, I want to look at Type 1a supernovas, which are exploding white dwarfs, using a spectrograph on the W. M. Keck Observatory. Type 1a supernovas were the basis of the Nobel Prize-winning discovery of acceleration of the expansion of the universe.

Little is known about how white dwarfs explode. The traditional model is that they get to a certain mass, called the Chandrasekhar mass, then they explode, but there's more than one way to explode a white dwarf, including well below the Chandrasekhar mass. The mass at which the white dwarf explodes actually feeds directly into what elements it creates. So, by looking at the output of these blasts in galaxies that orbit our galaxy, called dwarf galaxies, I can look at the ratio of elements in those galaxies and learn something about how the white dwarfs exploded.

What are your specific ideas for the classroom?

My ideas for the classroom reflect very much the talk that Carl Wieman, a physics professor from Stanford and Nobel Laureate, gave here a couple of weeks ago. In the last decade, he's been trying to introduce evidence-based teaching techniques into the classroom. These methods promote active learning, which is where the students are more involved in the classroom, rather than just passive. For example, you would want to break up lectures to make sure that the students' brains are working on solving problems. The idea is to get students thinking and talking to each other.

I would like to set up an online repository of classroom activities for the courses that I teach—which other professors can borrow from.

How do you recruit high school students to your lab?

I first got involved in working with high school students while I was a graduate student at UC Santa Cruz. My advisor there, Puragra (Raja) Guha Thakurta, runs a large network of high school mentorship programs. I took a piece of that program with me when I started as a postdoc here at Caltech, and I still have some students from that area. Now, as a professor at Caltech, I recruit students from Pasadena High School with the help of the CTLO [Caltech's Center for Teaching, Learning, & Outreach] and their Summer Research Connection program. One of the things I look for in high school students is a fluency in computers. You cannot do research in astrophysics without some computer programming. For that reason, I specifically recruit students from Pasadena High School's App Academy, which has a heavy computer programming component.

Why do you think it's important to improve teaching skills and work with young students?