From Spinning Black Holes to Exploding Stars: A New View of the Energetic Universe 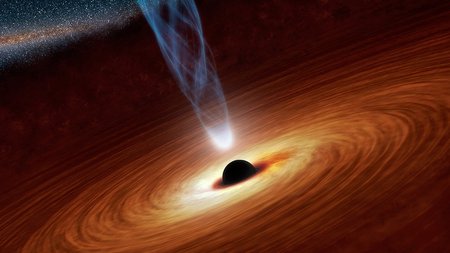 The Nuclear Spectroscopic Telescope Array, or NuSTAR, sees the high-energy X-rays emitted by the densest, hottest regions of the universe. The brainchild of Fiona Harrison, Caltech's Benjamin M. Rosen Professor of Physics and Astronomy and NuSTAR's principal investigator, the phone-booth-sized NuSTAR was launched from beneath an airplane's wing, unfolding to the length of a school bus once in orbit. Professor Harrison will describe NuSTAR's unlikely journey and share some of its remarkable results at 8:00 p.m. on Wednesday, December 4, in Caltech's Beckman Auditorium. Admission is free.

NuSTAR is the first focusing high-energy X-ray telescope. X-rays can be focused by reflection, but they're so penetrating that they only reflect at very glancing angles—sort of like skipping a stone off the surface of a lake. But most of the X-rays don't interact even then, so you use "nested optics," which you can think of as a set of cones nested inside one another like Russian dolls. Each cone intercepts some of the X-ray beam. The higher the energy, the more glancing the reflecting angle is, and the more cones you need.

Other focusing telescopes, such as NASA's Chandra X-ray Observatory and the European Space Agency's X-ray Multi-Mirror Mission, observe X-rays with energies below about 10 kilo-electronvolts. NuSTAR can see up to 79 kilo-electronvolts. Chandra has four nested mirrors, each about an inch thick and set at about a one-degree angle; NuSTAR has 133 mirrors as thin as my fingernail and almost parallel to the incoming light. We developed the detector here at Caltech. It's a digital camera, but made out of a special material that stops the high-energy X-rays that would have gone straight through previous X-ray imaging detectors.

NuSTAR is hundreds of times more sensitive, and its images are 10 times crisper than its nonfocusing predecessors, which basically worked like the pinhole camera you may have used to watch a solar eclipse. So we're able to observe the universe to much greater depth and in much greater detail than has previously been possible.

Q: What does NuSTAR see that we wouldn't see at other wavelengths?

A whole variety of things.

Medical X-rays are about 60 kilo-electronvolts, which is in the band that we observe. They penetrate the skin but stop in the bones, casting a shadow that shows up on the film. Similarly, we can look into the hearts of galaxies with high-energy X-rays, which penetrate the clouds of dust and gas where low-energy X-rays would be absorbed. We can see supermassive black holes, or rather the X-rays emitted by the very hot stuff falling into them. We can see neutron stars, which are the collapsed cores of burned-out stars so dense that a teaspoon of neutron star would weigh more than all of humanity. We can see the remnants of dead, exploded stars.

Q: What is your role in all this?

A: I built a pinhole-camera-type X-ray telescope as part of my PhD work at Berkeley in the early '90s, but I needed something much more sensitive to do what I really wanted to do. So I came down to Caltech, and we began developing NuSTAR's technology for a balloon experiment called the High-Energy Focusing Telescope, or HEFT. HEFT flew in 2005 and was so successful that we submitted a proposal to NASA's Small Explorer program to build a space version. As the principal investigator, I was responsible for putting the team together that proposed NuSTAR to NASA, and for overseeing the construction and launch. Now I lead the science team, which decides what to look at and analyzes all the data. Our primary mission ends in 2014, so right now I'm starting to write a proposal to extend the mission for another two years as a guest-investigator program open to anyone anywhere in the world.

I hope NuSTAR keeps me busy for another 10 years or more. There are no expendables such as cryogenic coolant, so it's a matter of how long the orbit lasts. We do experience atmospheric drag, so NuSTAR will eventually reenter and burn up. Either that, or something will break. As a small, inexpensive mission, we don't have redundant systems. If something breaks, there's no backup to switch over to.