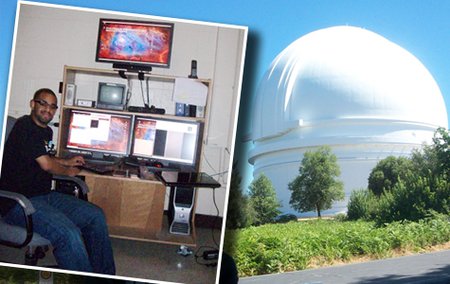 Over the coming weeks, we'll be highlighting several undergraduates and their summer research at Caltech. Some are Techers; others hail from schools across the country. Most are participating in the Summer Undergraduate Research Fellowships (SURF) program, a unique opportunity for undergraduates to spend 10 weeks over the summer doing original research with Caltech faculty. At the end of the project, students write a paper and present their work at SURF Seminar Day, which will take place on October 15 this year.

Like so many things in life, it all started with a girl.

In fifth grade, the girl who sat next to Keith Hawkins every day in class would check out encyclopedias and look up subjects in astronomy, admiring pictures of swirling galaxies and colorful nebulae. Hawkins would join her, and the two of them would sit together and gaze at the heavens, one page at a time.

Then, the following year, she moved away.

"It was kind of depressing for me," Hawkins says. "It was between elementary and middle school, so it was a little difficult. One of the ways I was able to get through that transition was to check out these encyclopedias and look at the pictures."

But one day, he started checking out the encyclopedias not for the pictures, but for the articles. "Kids would make fun of me because they realized I was looking at these books just for the pictures. Everyone thought, 'oh, he's just trying to act smart by checking out these complicated books and just looking at the pictures.' So I finally decided to read a little section to make it appear like I was reading. Sections turned into chapters, and chapters into books." By seventh and eighth grade, astronomy had become his hobby. "By tenth and eleventh grade, I decided to start doing research on it."

The books he read included Black Holes and Time Warps: Einstein's Outrageous Legacy, by Caltech's own Kip Thorne. He saw a program on the Science Channel called "Supermassive Black Holes," which explained how most galaxies harbor a black hole millions to billions of times more massive than the sun. These black holes drive how galaxies grow and evolve. "That right there is the program that started this all for me," he says. "I became extremely interested in the idea that black holes didn't just suck things in—they could be really influential in the galaxy's life. And that was so amazing to me. I just wanted to learn more about it."

And he did, working with an astronomer from Mount Union College near his hometown of Canton, Ohio to study how galaxies interact with one another in groups. He also worked with Markus Böttcher, an astronomer from Ohio University in Athens, about 150 miles away. Together, they studied blazars, a type of bright galactic nucleus with a black hole at the center.

Hawkins's research would lead him to state and national science fairs, and he earned top honors at the National Junior Science and Humanities Symposium (JSHS) in 2008 as a junior. He also placed in the top 15 in the physics and astronomy category of the Intel International Science and Engineering Fair (ISEF).

He continued research as a senior, participating in the fair again and winning the prize for best paper at JSHS. As a result, he earned a spot representing the United States at the London International Youth Science Forum. At the Intel ISEF, the American Astronomical Society and the Astronomical Society of the Pacific presented him with the Priscilla and Bart Bok Award for having one of the two best research projects.

After high school, Hawkins went to Ohio University, where he's now pursuing a major in astrophysics, a minor in mathematics, and a certificate in African studies. There, he's continuing his blazar research with Böttcher. Last fall, he spent four months teaching middle school in Ghana.

Now entering his junior year, Hawkins already has more research and observing experience than many third-year graduate students. He has been on six observing runs, totaling three and a half weeks at several telescopes on Kitt Peak in Arizona and Palomar Observatory, which he visited for the first time in July as a MURF student at Caltech. MURF is a summer undergraduate research program designed to attract underrepresented students to science, math, and engineering.

Here on campus, he's working with astronomer John Johnson, whom he met at the American Astronomical Society Meeting in Seattle last January. "I was struck by his maturity and the clarity of his poster presentation," says Johnson, who himself was once a SURF student. "I knew right away that he needed to spend some time at Caltech."

Johnson searches for exoplanets, which are planets that orbit other stars. So far, the Kepler space telescope has found more than a thousand new planets. Johnson's interested in how those planets are connected to the types of stars they orbit. For example, Johnson and his colleagues have already found that heavier stars tend to host heavier, Jupiter-sized planets. To better understand these relationships, Hawkins's job is to help develop a way to systematically measure the parameters of stars, such as size, temperature, and chemical composition.

Hawkins works closely with Tim Morton, a graduate student, as well as Johnson. He keeps them updated on his daily progress by writing in a research blog. "Dr. Johnson always says to me, ABW: always be writing," Hawkins says. "I'm really starting to understand why it's important to write. If you write every day, you get that skill down. Writing in any science field, I think, is so critical." He adds, "That's what I really like about Dr. Johnson. He has so much advice that other people aren't really willing to give out."

When it comes time to apply for graduate school, Hawkins says he'll definitely give Caltech a look. Before this summer, he heard that Caltech works grad students so hard that they never see the light of day. "I'm actually realizing that that's not how it is," he says. "I would like to come back here. I think this is one of the best institutions." Johnson, for one, will welcome him back. "He's a rare talent," he remarks, "and he's definitely going to make waves in astronomy as he progresses through his career."

And as for the girl who sparked this career? She's a philosophy and premed student at Ohio State University, and they still keep in touch. He dedicated his senior report in high school to her and, when he gets the chance, he wants to give her the medal that he won at JSHS.