Students and Postdocs Helped Make Sure LIGO Was Listening 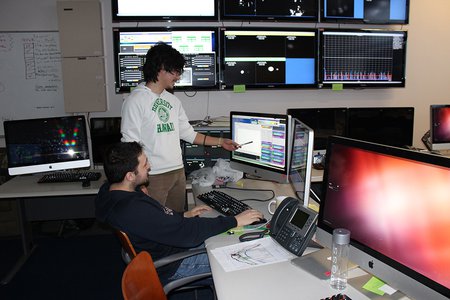 In the months leading up to the first detection of gravitational waves by LIGO (the Laser Interferometer Gravitational-wave Observatory), announced on February 11, Caltech postdoctoral scholar Sheila Dwyer and graduate student Evan Hall spent most of their waking hours in the control room at the LIGO Hanford Observatory in the remote plains of southern Washington. The observatory is one in a pair of giant interferometers built and operated by the LIGO Scientific Collaboration with funding from the National Science Foundation to search for the waves—ripples in the fabric of space-time.

Looking something like NASA's mission control rooms, where space missions are monitored, the LIGO control room has no windows. Instead, there are many monitors displaying camera feeds and plots that provide information about how the interferometer is working. To the uninitiated, the data feeds might be unintelligible. But, Dwyer says, "If you are used to spending time in the control room, you can instantly get an idea of how the interferometer is doing the moment you step into the room."

"Hours and hours go by where they're sitting at their computer consoles, not saying a word," says Rana Adhikari, Caltech professor of physics and Dwyer and Hall's advisor. " If you don't know what's going on, you might think that nothing is happening. But what they're doing is adjusting slightly the control algorithms which make the whole thing run. "

Indeed, Dwyer and Hall are part of a relatively small team whose job it is to make sure that the interferometer in Hanford is up and running at its best. There is a similar team in place at the second LIGO observatory in Livingston, Louisiana. A number of Caltech graduate students and postdocs have played pivotal roles in getting the two interferometers operating with enough sensitivity to detect the tiny signal of gravitational waves that came through at 5:51 a.m. EDT on Monday, September 14, 2015.

"It might be hard for people to understand because LIGO is such a big project, but everything actually depends on the grad students and postdocs, their attitudes, and what's going on with them," says Adhikari. "If they're really excited and interested, and they're really good, it's surprising how quickly the whole project moves."

Why? Because the students live and breathe the project, and they become experts on the instrument. "They are there day and night, during the week and on weekends," says Adhikari. "After several months of living like that, they get to a level of expertise that can't be matched." (He should know. He himself was once a graduate student working on LIGO.)

And the project requires that degree of dedication and expertise. Consider what LIGO does: It tries to detect the tiny effect that gravitational waves, often produced trillions upon trillions of miles away, have on the earth as they race by at the speed of light. In the case of LIGO's first detection, the ripples were produced 1.3 billion years ago by a type of event that is among the universe's most energetic—the merger of two black holes. Still, those waves squeezed and stretched space and time only ever so slightly as they passed through the earth. In fact, in order to detect the gravitational waves, LIGO had to be able to detect a change in distance of about one-thousandth the diameter of a proton (10-18 meter).

The twin LIGO interferometers are based on a fairly simple concept: laser light fired down two identical 4-kilometer lengths (situated in an "L" shape) toward identical mirrors should bounce back to their point of origin at the same time; a difference in the two arrival times could be caused by gravitational waves compressing space-time a tiny bit along one length while stretching it a similar amount along the other.

Those mirrors, and the entire apparatus within which they are contained, sit on the ever-moving earth. For the LIGO detectors to be able to pick out the motion associated with incoming gravitational waves, the interferometer must first be isolated from all other possible sources of movement—noise which could otherwise overwhelm the signal. Everything from seismic activity and wind, to trucks on the road and the hum of lights, to the minuscule quantum vibrations present in all objects can potentially jiggle the mirrors.

The current generation of LIGO detectors, installed in what is known as Advanced LIGO, marks a technical upgrade to Initial LIGO, which completed its observations in 2007, and a modified intermediate called Enhanced LIGO, which ran until 2010.  Advanced LIGO is about four times more sensitive to gravitational waves signals than Enhanced LIGO and has a sophisticated system in place to silence extraneous noise. In addition to operating in an elaborate vacuum (as LIGO always has) the system incorporates layer upon layer of noise-canceling technology based on the same underlying concept behind noise-canceling headphones. Measurements from vibration sensors on a hanging platform are fed to a computer that then tells an actuator how much to compensate, or push, in order to cancel out the noise. Another platform with slightly better sensors is suspended from the first and performs essentially the same trick. This is repeated three times, with each platform removing from 90 to 99 percent of the remaining noise so that in the end, the system currently removes all but 0.1 percent.  In addition, the mirrors are held steady by a multiple pendulum system that also helps reflect movement.

"It's a huge, huge engineering effort to make that work," says Adhikari. "Each component is a crazy system of wires and cables, and each platform has to be isolated from as much movement as possible. You need multiple, multiple sensors on each one doing feedback."

At the Livingston observatory, Denis Martynov (PhD '15), a former graduate student from Adhikari's group, spent two years tweaking the system—stabilizing the laser, aligning the mirrors precisely relative to each other, and helping to identify and then eliminate different types of noise in the instrument (something he calls "noise hunting"). For example, he and his colleagues discovered that electrostatic charge builds up on the surfaces of the interferometer's mirrors, allowing the electric field present in the instrument to push the mirrors slightly. He also worked on many of the noise-canceling techniques to improve the instrument's sensitivity.

Hall transferred many of those techniques to the Hanford facility. Although everything about the two interferometers—from their mirrors, to their suspensions, to their placement within the vacuum system—was designed to be identical, there were minor differences between the two instruments. "In some cases, the mirror position might differ by a few millimeters, or the curvature of a mirror may be slightly different," explains Hall. "Little things like that are enough to make the two detectors behave very differently." Hall and his colleagues had to figure out clever engineering tricks to make the two instruments behave like true twins.

Thanks to efforts like these, Advanced LIGO is a trillion times quieter than the motion of the earth. But its complexity also means that there are more things that can break, get out of alignment, or not work together properly.

"There are a lot of tweaks and tune-ups that have to be carried out in order to achieve good noise performance," says Hall. "However, it's not always obvious what these tweaks are. Often they can be things like a faulty piece of electronics, or a mirror that's not properly secured to an optical table. Those sorts of things take a lot of time to find, even if the fix is simple."

At 1:18 a.m. on Sunday, September 14—just a day before both LIGO facilities made their first detection—seismic waves from a series of earthquakes in Mexico affected the Hanford site. Though well over 1,000 miles away, the quakes left Dwyer and her colleagues with quite a bit of work to do. To protect the equipment, the isolation systems turn off during large seismic events, but the delicate instruments can still be disturbed. After the ground motion settled, the team began isolating all the seismic isolation platforms again, but had difficulty with one platform. While trying to recover from the earthquake and realign the optics, Dwyer and the team also found a glitch in the software that runs the system; it had been causing one of the optics to move when it was not supposed to. In all, it took the team in Hanford about 18 hours to get the instrument back up and running.

Dwyer came in that Sunday hoping to work on a pet project she hoped to finish before the start of the official observing run. "But because of the earthquake, we spent the day fixing more mundane problems, just trying to get the interferometer functional," she says.

It is a good thing they did because the following night, both LIGO facilities were ready to hear their first gravitational waves.