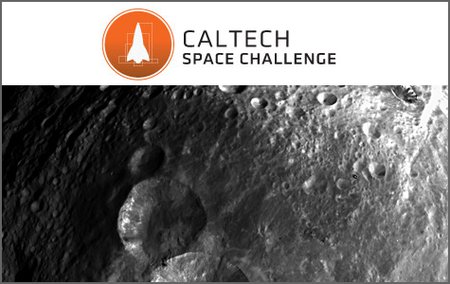 Deadline can be a dirty word for students and faculty alike at Caltech, since innovative research rarely adheres to time constraints. But this week, an international group of 32 students are taking on a particularly ambitious project that will push the limits of both time and space. As participants in the Caltech Space Challenge, they are tasked with designing a human mission to an asteroid by Friday, giving them just five days to complete a project that typically takes years.

"The students coming into the competition are already charged up and ready to work," says co-project lead Prakhar Mehrotra, who has no doubt the participants will reach their goals in the allotted time period. "Their excitement is beyond my expectations."

As previously reported on Caltech Today, the Caltech Space Challenge is a weeklong workshop in which two teams compete to design the best mission to an asteroid or comet in Earth's neighborhood—a so-called Near-Earth Object (NEO)—that would return a sample of rock or ice. Initially sponsored through a Keck Institute for Space Studies (KISS) seed grant, the project has evolved over the past few months to include corporate and alumni sponsors.

"The event has grown beyond what we thought it would be in so many ways," says Mehrotra, who is a PhD student in Aeronautics at the Graduate Aerospace Laboratories at the California Institute of Technology (GALCIT). "When we started, we had a $20,000 seed grant from Keck and hoped to recruit 20 students. With corporate sponsorship, we've raised $125,000 and the event is now hosting 32 students from around the world."

With the additional money, Mehrotra and co-project lead Jon Mihaly, a PhD candidate in aerospace at GALCIT, were also able to set up guest speaker events throughout the week. They are open to the public and include presentations from Gerhard Schwehm, Head of the Planetary Science Division at the European Space Agency; Josh Hopkins, a space exploration architect at the Lockheed Martin Space Company; and Don Yeomans, Senior Research Scientist and JPL Fellow who manages NASA's Near Earth Object Program Office at JPL. For a full schedule, click here.

The team also set up a blog to encourage outside participation in the challenge. Out of 275 applicants, only 32 were chosen to participate onsite at Caltech. "We wanted the rest of them to be able to still be part of the competition, so we posted questions designed by faculty mentors on the site and asked for feedback," explains Mehrotra. "If the teams use any of the ideas genertated on the blog, they need to be credited in the final report."

Eight students from Caltech were selected for the final teams, named Explorer and Voyager, which include graduate and undergraduate students from around the world. The winning team will be crowned during a closing ceremony at the Athenaeum on Friday night.

"I'm very interested to see how the students from different institutions and different backgrounds work together toward a common goal of building knowledge," says Mehrotra. "My vision was to make use of the amazing space resources we have at Caltech, in particular JPL, to help solve a problem of national importance. With less money going to space research, we need to motivate people. How else will we save aerospace?"

For more information on the Caltech Space Challenge, visit the KISS website.