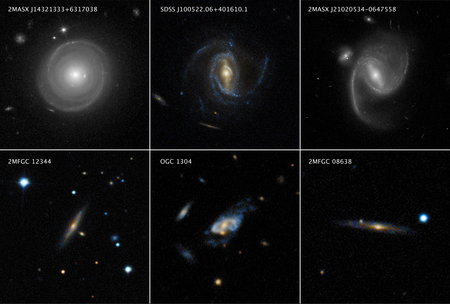 The top row of this mosaic features Hubble images of three spiral galaxies, each of which weighs several times as much as the Milky Way. The bottom row shows three even more massive spiral galaxies qualifying as "super spirals," which were observed by the ground-based Sloan Digital Sky Survey. Super spirals typically have 10 to 20 times the mass of the Milky Way. The galaxy at lower right, 2MFGC 08638, is the most massive super spiral known to date, with a dark matter halo weighing at least 40 trillion suns. Credit: Top row: NASA, ESA, P. Ogle and J. DePasquale (STScI). Bottom row: SDSS, P. Ogle and J. DePasquale (STScI)
Tags:
instrumentation, astronomy & physics, Instrumentation

New research has found that the most massive spiral galaxies, dubbed "super spirals," spin faster than expected. Whereas our own Milky Way galaxy spins at a speed of 130 miles per second in our sun's neighborhood, the super spirals—which weigh up to 20 times more than our Milky Way—spin at a rate of up to 350 miles per second.

"Super spirals are extreme by many measures," says Patrick Ogle (PhD '98) an observational astronomer at the Space Telescope Science Institute in Baltimore, and formerly an associate research scientist at IPAC, Caltech's astronomy data and science center. "They break the records for rotation speeds."

Ogle is lead author of a paper accepted for publication in the Astrophysical Journal Letters.

Super spirals were originally discovered in data acquired by the Sloan Digital Sky Survey as well as the NASA/IPAC Extragalactic Database (NED), which is based at Caltech. In the new study, the rotation rates of super spirals were collected with the Southern African Large Telescope (SALT), the largest single optical telescope in the southern hemisphere, and the 200-inch Hale Telescope at Caltech's Palomar Observatory. Data from NASA's Wide-field Infrared Survey Explorer (WISE) mission, whose data archive is based at IPAC, were crucial for measuring the galaxy masses in stars and star formation rates.

Read the full story from the Space Telescope Science Institute.