A Tabletop Approach to Probing Fundamental Laws of Physics 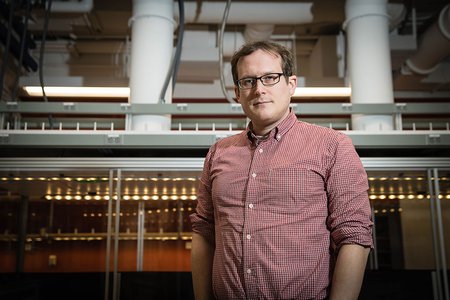 Nick Hutzler, a new assistant professor of physics, is returning to Caltech after 10 years of probing the fundamental laws of physics at Harvard University. He earned his undergraduate degree in mathematics from Caltech in 2007, then switched to physics, earning his PhD from Harvard in 2014 and completing a postdoctoral fellowship, also at Harvard, in 2017.

Hutzler uses tabletop experiments to study the fundamental particles and laws of nature. Unlike particle accelerator experiments, where atoms are smashed together, he uses laser beams to carefully probe atoms and molecules and look for the hidden influences of never-before-seen particles and "broken symmetries" in the laws of physics.

We sat down with Hutzler to talk about his move back to Caltech and the advantages his tabletop technique brings to particle physics.

What made you switch from mathematics to physics?

I was a math major at Caltech, but I did a lot of physics. During my freshman year I was a SURF [Summer Undergraduate Research Fellowship] student at JPL and then my sophomore year I started doing research with Brad Filippone [the Francis L. Moseley Professor of Physics]. I continued doing research with Brad until I left for Harvard. I still use math every day, but now as an experimental physicist, I also get to hit stuff in the lab with a hammer and shoot lasers!

How are you able to probe matter at the most fundamental levels with tabletop experiments?

My goal is to look for the signature of new physics interacting with regular matter—in particular, atoms and molecules. If you can perform very precise measurements of the properties of atoms or molecules, you can actually see signatures of the same types of particles found in particle accelerator experiments.

In our experiments, we take atoms or molecules and put them in an ultrahigh vacuum chamber so that there's nothing, such as background gas atoms, bumping into them. You cool them down so that you don't have to worry about thermal effects or the molecules bouncing into each other. And then you shoot a laser at the molecules to push around the electrons and nuclei and see what happens.

What kinds of signals are you looking for?

We're looking for effects that violate fundamental symmetries in the laws of physics, meaning that we're looking for something that shouldn't actually be there at all. For example, we know the universe is made out of matter and not antimatter, which means that some kind of symmetry was broken in the laws of physics—otherwise, we would have the same amounts of matter and antimatter. This is called the baryon asymmetry problem. We're looking for signatures of this same type of symmetry breaking in the atoms and molecules in an electromagnetic field, specifically by looking for energy shifts that violate the symmetry rules found in textbooks on electromagnetism and quantum physics.

Are other scientists doing these same types of experiments?

What drew you back to Caltech?

What drew me to Caltech as an undergrad and as faculty is that it's pretty unique. It's small and overwhelmingly focused on science and engineering, and has lots of world-class research going on. There are not very many places that offer all of that and none that offer it in the way that Caltech does.

Our lab on the first floor of Downs-Lauritsen is just about completed, and we're excited to get to work. That's one of the nice things, in my opinion, about this tabletop approach to looking for new particles: you can do this all here. You don't have to go to an accelerator or a telescope. We can just do it all on the first floor of Downs-Lauritsen.