From Theory to Reality: An Interview with Jason Alicea 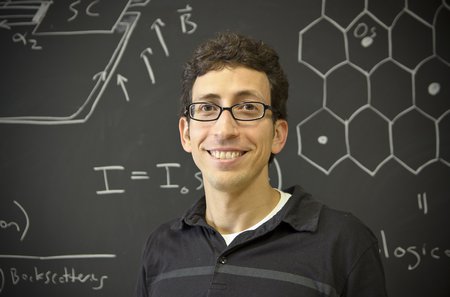 Quantum computers—computers that harness the bizarre laws of quantum mechanics to become vastly more powerful than conventional computers—have been touted as the next leap in technology. Although useful quantum-computing technology is probably years—and possibly decades—away, physicists like Jason Alicea, who joined Caltech's faculty this fall as an associate professor of theoretical physics, are working hard to make it a reality. Alicea's research involves translating purely theoretical ideas into real-life experiments and applications. He recently answered a few questions about himself and his research.

What have you been working on lately in the field of quantum computing?

One thing that my colleagues [who include Caltech's Gil Refael and UC Santa Barbara's Matthew Fisher, both part of the Institute for Quantum Information and Matter at Caltech] and I did recently was to try to understand how to combine very simple components like semiconducting wires, ordinary superconductors, and magnetic fields to build a device that is capable of performing some rudimentary quantum-information processing without the infamous problem of decoherence—in which outside noise spoils the device's quantum properties and ruins any sort of computation it might be doing.

The physics we describe leads to blueprints for devices that may actually appear in a quantum computer down the road, although we're very far from that point.

The basic idea centers around exotic objects known as Majorana fermions that allow one to store and manipulate quantum information in a way that's protected against decoherence. The particular techniques that we originally envisioned turn out to have somewhat limited applications in quantum-information processing. But our ultimate dream would be to still use similar ideas—combining traditional conventional materials that are already available on people's shelves—to design a device that's capable of performing bona fide universal quantum computation without decoherence. We don't know how to do that, but we've made some small steps in that direction fairly recently. That's what I'm most excited about right now.

Were you always interested in science and physics when you were growing up?

Not really. I think this sets me apart from a lot of my colleagues. Often I ask people—like my fellow professors—when they became interested in physics and when they knew they wanted to be physicists. The answer I often get is that it was when they were four or five years old. I had the opposite experience. I didn't really know much about physics until I was fairly far along in college. I entered college as an engineering major with no intention of doing physics. When I was a sophomore and had to take some courses for my engineering curriculum, physics started to draw me in. I had a sort of midcollege crisis trying to decide what I was going to do. It was not an easy switch, but I decided that physics was a better course for me to follow.

Was there something particular about physics that you enjoyed?

Physics was actually extremely difficult for me. In the first physics class I took, I remember doing very poorly in the beginning and I had to work exceptionally hard, doing lots of extra problems that weren't assigned because I just wasn't used to thinking the way one has to in order to do physics. Overcoming that challenge was pretty enjoyable. I also think that I'm naturally more inclined toward fundamental questions of science as opposed to engineering. That wasn't something that was clear to me until I actually had some solid experience in physics.

What do you do when you're not doing physics?

I've been playing piano and keyboard since I was in high school, and when I was in college I played in a band. Recently, I've started to learn the guitar, writing some songs with a friend of mine. We aren't quite aiming to form a bona fide band, but we're looking to go to some open-mike nights. He's a great bass player and I'm the singer slash guitar player, but I'm good at neither. But that doesn't stop me from enjoying myself.

Alicea grew up in Brooklyn before moving to Florida in middle school. After receiving his BS in 2001 from the University of Florida, he came west to California, where he earned a PhD in physics from UC Santa Barbara in 2007. After a stint as a postdoc at Caltech, he spent time as an assistant professor of physics at UC Irvine before returning to Caltech.