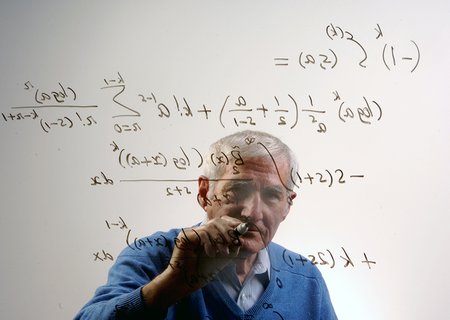 Apostol was born in Helper, Utah, on August 20, 1923. He received his bachelor of science in chemical engineering in 1944 and a master's degree in mathematics in 1946, both from the University of Washington, Seattle. In 1948, he received his PhD in mathematics from the University of California, Berkeley. In 1950, he arrived at Caltech as an assistant professor; he was named associate professor in 1956, professor in 1962, and professor emeritus in 1992.

Apostol was the author of several influential textbooks. For more than five decades, undergraduate introductory mathematics courses at Caltech have used Apostol's two-volume text, "Calculus," which is often referred to by Caltech students as "Tommy 1" and "Tommy 2." These volumes, as well as many of his other textbooks in mathematical analysis and analytic number theory, have been translated into Greek, Italian, Spanish, Farsi, and Portuguese. Apostol also worked with a Caltech team that produced The Mechanical Universe . . . and Beyond, a 52-episode video lecture series based on The Mechanical Universe: Introduction to Heat and Mechanics and Beyond the Mechanical Universe: From Electricity to Modern Physics, the introductory physics textbooks that Apostol coauthored.

Apostol later was the creator, director, and producer of Project MATHEMATICS!, a series of award-winning computer animated videos that explore basic topics in high school mathematics such as the Pythagorean Theorem, scaling, sines and cosines, and the history of mathematics. The nine videos, which are still available for order through the Caltech bookstore, are estimated to have been viewed by 10 million people worldwide.

"Tom was a great scholar and a beloved teacher and mentor. Generations of Caltech students benefited from his passion and dedication," says Fiona Harrison, the Benjamin M. Rosen Professor of Physics and the Kent and Joyce Kresa Leadership Chair of the Division of Physics, Mathematics and Astronomy.

"Tom Apostol was a great human being and mathematician, and an inspiration to many. He was very famous the world over for his immense talent for mathematical exposition," says Dinakar Ramakrishnan, Caltech's Taussky-Todd-Lonergan Professor of Mathematics and executive officer for mathematics. "His books set a high standard but remained accessible to many, as decades of Caltech undergraduates would testify, while his videos have stimulated high school students to pursue the beauty of mathematics."

In 1982, Apostol received an award for teaching excellence from the Associated Students of the California Institute of Technology (ASCIT). In 1998 the Mathematical Association of America (MAA) awarded him the annual Trevor Evans Award, presented to authors of an exceptional article that is accessible to undergraduates, for his piece entitled "What Is the Most Surprising Result in Mathematics?" (Answer: the prime number theorem). In 2005, 2008, and 2010, he was awarded MAA's Lester R. Ford Award, given to recognize authors of articles of expository excellence. He additionally served as a visiting lecturer for the MAA and as a member of hits Board of Governors.

He was named as one of the inaugural class of Fellows of the American Mathematical Society in 2012.

Apostol, who was an American of Greek descent, spent four months in Greece as a visiting professor of mathematics at the University of Patras in 1978. Additionally, he spent eight years as a member of an Electoral Committee selecting faculty for the University of Crete. In 2001, he was elected as a corresponding member of the Academy of Athens.

Apostol is survived by his wife, Jane Apostol; his stepson, Stephen Goddard; his sisters, Kay Navrides and Betsie Strouzas; and his brother, John Apostol.

A memorial service is being planned for later this year.