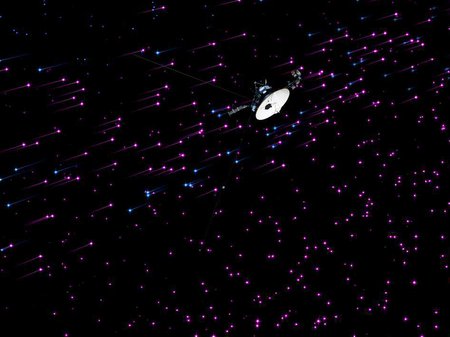 Voyager 1 has entered interstellar space. The NASA spacecraft, which rose from Earth on a September morning 36 years ago, has traveled farther than anyone, or anything, in history. Now Voyager 1 is in the space between the stars.

Here are some thoughts from Caltech scientists on the news that Voyager 1 has finally traveled beyond the solar bubble and entered interstellar space:

"It's great to know when you get out of your back yard and into the wild country, beyond the sun's influence, to sample interstellar space. There's no substitute for real data; there are always surprises when you move into new regions of space."

"This will impact the thinking of every scientifically literate person. It's a humbling experience, like seeing the Earth from space as a little blue dot. And now you get an even stronger sense of how small the solar system is, and how small the sun is, and how puny humans are.

"We are now genuinely out in the realm of interstellar matter. From the astronomer's point of view, Voyager is now in a different box.

"It's an extraordinary achievement for JPL, and a great personal achievement for Ed Stone's team—the technological brilliance of what they did, that the thing is still working after 30-plus years."

— Marshall Cohen, Professor of Astronomy, Emeritus; in the 1960s, he was among the first researchers to do radio-astronomy studies of the solar wind

"I have worked on Voyager since 1973, some four years before the two spacecraft were launched. It is therefore particularly exciting and satisfying to me to see Voyager 1 cross into interstellar space, especially at a time when we are receiving and analyzing data from it on a daily basis! It's a fantastic achievement, and to think that it will cruise around forever in our galaxy is truly mind-boggling."

"It's a profound event in human history. It's a great tribute to the dedication of Ed Stone and the Voyager team, to JPL, to NASA, and to humankind's quest for exploration."

— B. Thomas Soifer (BS '68), professor of physics, director of the Spitzer Science Center, and chair of the Division of Physics, Mathematics and Astronomy

"This event makes me think of Carl Sagan, who helped people appreciate our cosmic explorations. He might have said that this is only a first step. We have left our own star behind, but there are billions and billions of other stars just in our own galaxy. Science is an endless frontier, and we are on our way."

— Andrew Ingersoll, professor of planetary science and a member of the Voyager project's atmospheric-science team

"Reaching this historic milestone is even more exciting because it marks the beginning of Voyager's exploration of the space between the stars."