Voyager I Surveys Outer Reaches of the Solar System 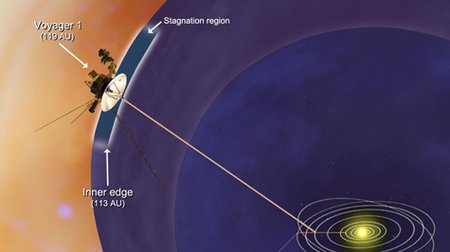 The Voyager I spacecraft, which was built at JPL and launched in 1977, has reached a previously unexplored region between our solar system and interstellar space.  Data collected from this zone indicates very little solar wind, a strong magnetic field, and a possible leak of high-energy particles from our solar system into the interstellar space. The latest findings from the mission were announced today at the American Geophysical Union's fall meeting in San Francisco.

"Voyager tells us now that we're in a stagnation region in the outermost layer of the bubble around our solar system," said Ed Stone, Voyager project scientist at Caltech, in a JPL/NASA press release. "Voyager is showing that what is outside is pushing back. We shouldn't have long to wait to find out what the space between stars is really like."