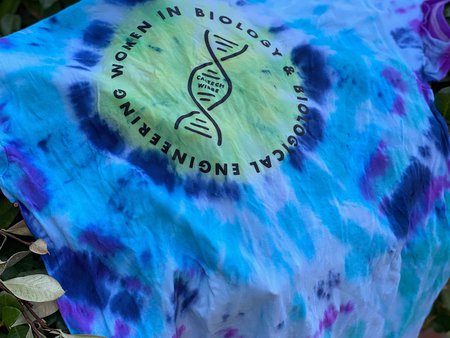 Across Caltech, around a dozen of what have become known as "women-in" groups—led by graduate students and composed of women-identified graduate and undergraduate students, postdocs, staff, and faculty—grapple with some of the most difficult issues faced by women seeking successful and rewarding careers in STEM fields traditionally dominated by men.

On their own, the groups carry out gender-related advocacy work and host an array of events including journal clubs, invited speakers, professional development and skill-building workshops, and community events. When they come together under the aegis of the Institute's Women's Engagement Board (WEB), a 55-member organization facilitated by the Caltech Center for Inclusion & Diversity (CCID), they find an even stronger sense of community and interconnectedness. WEB, whose membership is made up of the leaders of the women-in groups, was launched in 2016 with the shared goal of building a more inclusive Caltech campus.

"Every month, the WEB meeting is the highlight of my day," says Clare Singer, a third-year graduate student in the Division of Geological and Planetary Sciences and vice president of Women in GPS (WinG). "We're all doing the same things in parallel. In a recent meeting, one of the women in the group brought up an issue that she was facing in her department, and we all brainstormed with her."

The WEB meetings provide a forum, says Monique Thomas, program coordinator with CCID, for members to connect and talk about programming within their own groups as well as projects they can work on collaboratively to support all women on campus. "Themes and threads" start to emerge around common challenges for women across divisions, she says, and CCID's role is to understand the issues that are coming up and to "be there to support the women as individuals and as scientists in their divisions."

Yazmin Gonzalez, CCID's new assistant director, who will be taking on oversight of WEB this spring, says affinity spaces such as WEB and the women-in groups help individuals realize they are not alone in whatever they might be going through. "It's about validation and also recognition that there are certain systems that need to be shifted. The fact that folks can see their experiences reflected in the experiences of somebody else in another division is very powerful."

"It's been really eye opening and helpful," says Women in Biology and Biological Engineering (WiBBE) co-chair and third-year graduate student Acacia Hori, "as a catalyst for creating cross-disciplinary, cross-department relationships that empower us to advocate for graduate student support, changes to admissions policies, or things like that. But also, it's just great to be able to meet people through this shared aspect of our lives."

A recent screening of Picture a Scientist, a 2020 documentary on gender equity in science that featured women scientists telling their stories, provided an opportunity to discuss discrimination, microaggressions, the intersection of race and gender, sexual harassment, and other issues faced by women in STEM. "There's a lot to unpack," says CCID program coordinator Alison Tominaga, "so WEB organizers partnered with the CCID and the Equity and Title IX Office to offer a separate space for people who had raw emotions of anger, sadness, and frustration to process and to discuss the film."

WEB also hosts panel discussions, including one that featured Dotty and Dick Hayman Professor of Mechanical Engineering Melany Hunt talking about her experiences and her work on Giving Voice, a project she developed that creates recorded vignettes that illustrate the challenges that disproportionately affect women in science and engineering labs and classrooms.

While the individual women-in groups' activities vary, working to effect positive change for Caltech women is a priority for all. "It's about advocating, voicing our needs, and voicing our positions," says Rochelle Diamond, director of Caltech's Flow Cytometry/Cell Sorting Facility, manager of a BBE research group, and a member of WiBBE. Diamond, who has long been involved in advocacy work and is chair emeritus of the National Organization of Gay and Lesbian Scientists and Technical Professionals, was part of a recent successful effort to garner more support for postdocs and graduate students with children to help them meet the costs of childcare. And Dawna Bagherian, who is on track to graduate with a PhD in neuroscience this spring, successfully campaigned in her role as co-chair of Chen Institute Women in Neuroscience (CWiN) to get free menstrual products provided in all of the restrooms on campus. "It feels like such a little thing," she says, "but it was a long journey to get there, and I'm glad that we got that done."

Many of the activities organized by the women-in groups center around building community through game nights, happy hours, and other social events. As WiBBE's Hori says, "It's not always the seminar-style talks that make the strongest connections. The social events are a great way to make those connections that you can then expand on later."

The groups have also hosted coffee chats or lunch hour conversations with women speakers who talk about their career paths and navigating systemic challenges that women in academia, and particularly in STEM, face. For Women's History Month, many of the groups developed special programs: WiBBE, for instance, organized a presentation on Nobel Prize-winning cytogeneticist Barbara McClintock, who spent time at Caltech from the 1930s to the '50s as a research fellow and visiting professor.

Through journal clubs, women in the campus groups share articles in the social science literature about women in STEM and then meet for group discussions. "We talk about stuff like imposter syndrome," says WinG's Singer, "or issues of getting spoken over during lab meetings. We also talk about topics related to job searching, balancing work and family, and the ‘two-body problem,' trying to find a career in the same place as your spouse." Other issues include navigating the barriers often encountered by women on the pathway to their degree.

Mentoring has been another priority for some of the women-in groups, including Women in BBE, which before the pandemic had a successful program that matched women with scientists at the next step of their professional development in their division. Plans are in place to pick this up again once conditions allow. The groups also work on professional development for women, putting together programs such as a graduate school application workshop that was recently coordinated by Women in PMA.

"I think there are particular challenges for women of color in STEM," adds CCID's Tominaga, who is the adviser for Caltech's Asian American Pacific Islander (AAPI) group and advocacy chair for Asian Pacific Americans at Caltech (APACT), an employee resource group. Tominaga is in the process of putting together affinity spaces for AAPI women. Another affinity space, Women of Color in STEM (WOC), also hosted by CCID, invites those who identify as women of color to come together for community.

In addition to her role in CWiN, Bagherian is also part of the organizing committee for Caltech for Black Lives, an ally organization of Caltech students and staff dedicated to supporting the work of the Black Scientists & Engineers of Caltech (BSEC). "It's been nice to have my hands in both spaces because it's enabled me to say, for example, ‘Caltech for Black Lives is doing this. Let's try and get our organization involved.'"

The women-in groups have become proactive in talking to potential students, too. "I've noticed increasingly," says Singer, "that prospective students will ask me, ‘What is it like to be a woman in this department?' It wasn't at the front of my mind when I was applying to grad schools, but I think this is becoming even more of a priority for them."

For Hori, being part of a women-in group has been a revelation, if a somewhat unexpected one. "I didn't realize how helpful this would be until I was actually in the group and really enjoying the companionship and camaraderie with other women scientists. It makes me feel so empowered and so welcome on this campus, even if things are not always perfect; just knowing that these are solvable problems and that there are things that we can do as we work together really helps."