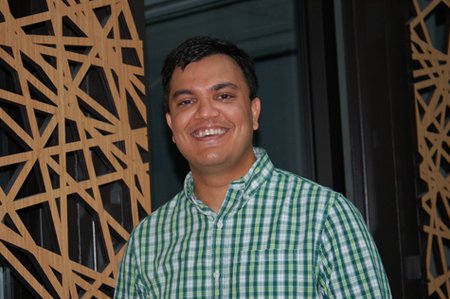 Venkat Chandrasekaran, an assistant professor of computing and mathematical sciences, arrived at Caltech in early September. Chandrasekaran, who was born in Mumbai, India, and grew up in a number of different Indian and Middle Eastern cities, studied mathematics and electrical engineering as an undergraduate student at Rice University and earned his master's and PhD at MIT. Before joining Caltech's faculty, he completed a postdoctoral fellowship at UC Berkeley. We recently asked him some questions about his work and what drew him to Caltech.

What kind of research do you work on?

My area of research is mathematical optimization. Almost anything we wish to do in engineering design is about maximizing objectives subject to certain constraints—trading off different aspects of a system to optimize a few others. For instance, if you work in jet-engine design, you have certain constraints in the amount of material you can use, the weight of these materials, aerodynamic issues, etc. But then you want to be able to design your wings and so on in such a way that you maximize, for example, how fast you are able to go. If you work in finance, you might want to maximize your returns given that you have a certain amount to invest and have other constraints based on market volatility.

Can you give some examples of the types of problems you work on?

For my PhD, I worked on a problem in statistical modeling. The idea is you get measurements of a bunch of variables—these could be the prices of different stocks in the stock market, it could be a bunch of physiological attributes of a patient, it could be any collection of variables—and would like to understand the relationships between these variables. In the first case, with stock prices, you want to be able to figure out how A affects B affects C in very complicated ways to be able to make better investments. In the second case, you'd like to be able to figure out the correlations between weight, age, and something else, versus blood pressure, for instance. Frequently, in trying to understand the relationships, interactions, or correlations between these variables, there are some relevant variables that you don't observe, which is a big challenge. So, for instance, in the stock market example, there may be some geopolitical factor that is not directly observable but that influences the way stock prices move. The question is: by looking at the original set of variables that you do get to observe, can you potentially infer the existence of hidden effects that you can't observe directly? If I can account for these, then I can discover a really simple, nice set of relationships, interactions, or rules governing the original set of variables. We have developed efficient tools based on optimization to solve this problem.

Another problem that I have been working on for the past year or so deals with statistics and what people have described as "big data." It is often the case that as datasets scale up, the algorithms that ran efficiently on smaller sets now fail to run. But more data should never be a constraint—it should be helping, not hurting me. So the idea is: as I get more data, can I run a different algorithm that actually runs in less time on larger and larger data sets? I'm currently working on algorithms that would do less optimal processing on each individual data point, thereby reducing the overall run time on a larger dataset, while still providing the same level of performance.

What brought you to Caltech?

One of the things I really liked was the close interaction between folks in applied math and folks in electrical engineering/computer science. I think one of the great things at Caltech—since it's a relatively smaller place—is that even on my floor, there are people who do very, very different things than what I do. I think that fosters interaction among people who are much farther away from each other, in terms of scientific discipline, than at many other places. That's only useful if you share a common language, and this is something else that Caltech does very well—there is a commitment to mathematical rigor. Everybody knows their math. And so while we may be working in very different disciplines, there is this common language, this common technical background, that we all share, making us able to talk to each other. I think the opportunity to learn from someone else is absolutely maximized if you share broadly the same language but have maybe a different perspective. You get exposed to very different ways of thinking.