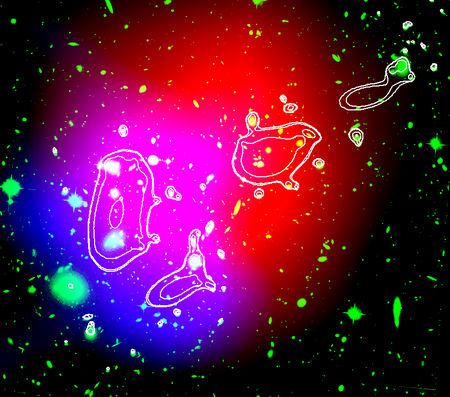 By observing a high-speed component of a massive galaxy cluster, Caltech/JPL scientists and collaborators have detected for the first time in an individual object the kinetic Sunyaev-Zel'dovich effect, a change in the cosmic microwave background caused by its interaction with massive moving objects.

MACS J0717.5+3745 is an extraordinarily dynamic galaxy cluster with a total mass greater than 1015 (a million billion) times the mass of the sun or more than 1,000 times the mass of our own galaxy. It appears to contain three relatively stationary subclusters (A, C, and D) and one subcluster (B) that is being drawn into the larger galaxy cluster, moving at a speed of 3,000 kilometers per second.

The galaxy cluster was observed by a team led by Sunil Golwala, professor of physics at Caltech and director of the Caltech Submillimeter Observatory (CSO) in Hawaii. Subcluster B was observed during what appears to be its first fall into MACS J0717.5+3745. Its momentum will carry it through the center of the galaxy cluster temporarily, but the strong gravitational pull of MACS J0717.5+3745 will pull subcluster B back again. Eventually, subcluster B should settle in with its stationary counterparts, subclusters A, C, and D.

Though subcluster B's behavior is dramatic, it fits neatly within the standard cosmological model. But the details of the observations of MACS J0717.5+3745 at different wavelengths were puzzling until they were analyzed in terms of a theory called the kinetic Sunyaev-Zel'dovich (SZ) effect.

In 1972, two Russian physicists, Rashid Sunyaev and Yakov Zel'dovich, predicted that we should be able to see distortions in the cosmic microwave background (CMB)—the afterglow of the Big Bang—whenever it interacts with a collection of free electrons. These free electrons are present in the intracluster medium, which is made up primarily of gas. Gas within dense clusters of galaxies is heated to such an extreme temperature, around 100 million degrees, that it no longer coheres into atoms. According to Sunyaev and Zel'dovich, the photons of the CMB should be scattered by the high-energy electrons in the intracluster medium and take on a measurable energy boost as they pass through the galaxy cluster.

This phenomenon, known as the thermal SZ effect, has been well supported by observational data since the early 1980s, so it was no surprise when MACS J0717.5+3745 showed signs of the effect. But recent observations of this galaxy cluster yielded some curious data. A team led by Golwala and Jamie Bock—also a Caltech professor of physics—observed MACS J0717.5+3745 with the CSO's Bolocam instrument, measuring microwave radiation from the cluster at two frequencies: 140 GHz and 268 GHz. Through a simple extrapolation, the 140 GHz measurement can be used to predict the 268 GHz measurement assuming the thermal SZ effect.

Yet observations of subcluster B at 268 GHz did not match those expectations. The trio of Caltech and JPL postdocs who had first proposed observations of MACS J0717.5+3745—Jack Sayers, Phil Korngut, and Tony Mroczkowski—puzzled over these images for some time. Trying to sort out the discrepancy, Korngut kept returning to subcluster B's rapid velocity relative to the rest of the cluster. Prompted by Korngut's interest, Mroczkowski decided one weekend to calculate whether the kinetic SZ effect might explain the discrepancy between the 140 GHz and 268 GHz data. To everyone's surprise, it could. In order to show this conclusively, the signals from dusty galaxies behind MACS J0717.5+3745 also had to be accounted for, which was done using data at higher frequencies from the Herschel Space Observatory analyzed by Mike Zemcov, a senior postdoctoral scholar at Caltech. The model combining the two SZ effects and the dusty galaxies was a good match to the observations.

The kinetic SZ effect, like the thermal SZ effect, is caused by the interaction of the extremely hot and energetic electrons in the gas of the intracluster medium with the CMB's photons. However, in the kinetic effect, the photons are affected not by the heat of the electrons, which gives a random, uncoordinated motion, but instead by their coherent motion as their host subcluster moves through space. The size of the effect is proportional to the electrons' speed—in this case, the speed of subcluster B.

Prior to this study of MACS J0717.5+3745, the best indication of the kinetic SZ effect came from a statistical study of a large number of galaxies and galaxy clusters that had been detected by the Atacama Cosmology Telescope and the Sloan Digital Sky Survey. This is the first time, Golwala says, "that you can point to a single object and say, 'We think we see it, right there.'"

"By using the kinetic SZ effect to measure the velocities of whole clusters relative to the expanding universe, we may be able to learn more about what causes the universe's accelerating expansion," Golwala explains. The next step in the process is the development of new, more sensitive instrumentation, including the new Multiwavelength Sub/millimeter Inductance Camera recently commissioned on the CSO.

The paper detailing these observations is titled "A Measurement of the Kinetic Sunyaev-Zel'dovich Signal Towards MACS J0717.5+3745," and appears in Astrophysical Journal. Sayers, Mroczkowski (now at the U.S. Naval Research Laboratory), Zemcov, and Korngut are the lead authors. Other authors from Caltech and JPL include Bock, Nicole Czakon (now at Academia Sinica in Taiwan), Golwala, Leonidas Moustakas, and Seth Siegel. Funding for the research was provided by the Gordon and Betty Moore Foundation, the National Aeronautics and Space Administration, the National Science Foundation, the Norris Foundation, the National Science Council of Taiwan, and the Academia Sinica Institute of Astronomy and Astrophysics.