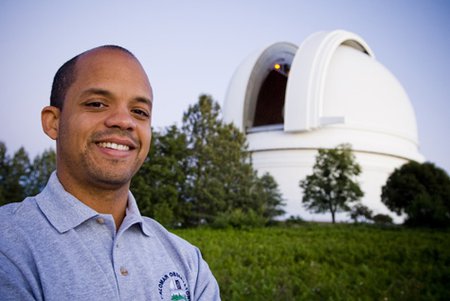 John Johnson, assistant professor of astronomy at Caltech, has been named the recipient of the American Astronomical Society's 2012 Newton Lacy Pierce Prize, which is awarded for outstanding achievement in observational astronomical research based on measurements of radiation from an astronomical object.

According to the award citation, Johnson was selected "for major contributions to understanding fundamental relationships between extrasolar planets and their parent stars."

Johnson's primary research focus is on the detection and characterization of exoplanets. Recently, he led a team of astronomers that discovered the three smallest confirmed planets ever detected outside our solar system.

"I'm proud because this reflects well on my entire team here at Caltech, as well as my collaborators at other institutions," said Johnson. "We put in a lot of hard work and we strive to produce the best, highest impact, and most trustworthy exoplanet science out there. This award is a nice validation that we're on the right track."

As the recipient of the Pierce Prize, Johnson will receive a cash award and has been invited to give the plenary talk at the AAS meeting in Long Beach next year.

"I can remember sitting in a plenary talk as a grad student thinking about how nice it would be to one day do research worthy of such an audience," says Johnson. "It looks like I've arrived."