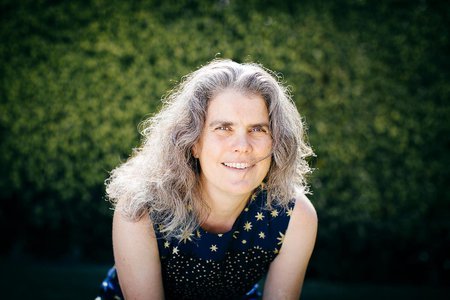 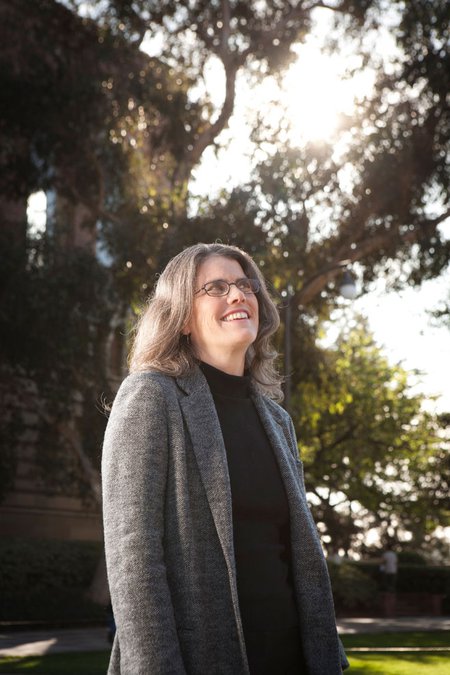 Andrea Ghez (MS '89, PhD '92), the Lauren B. Leichtman and Arthur E. Levine Professor of Astrophysics at UCLA, has won the 2020 Nobel Prize in Physics for pioneering research that helped reveal a supermassive black hole lurking at the center of the Milky Way galaxy. She shares half the Nobel Prize with Reinhard Genzel of UC Berkeley and the Max Planck Institute for Extraterrestrial Physics. Together, Ghez and Genzel are being honored "for the discovery of a supermassive compact object at the centre of our galaxy."

The other half of the Nobel Prize goes to Roger Penrose of the University of Oxford, "for the discovery that black hole formation is a robust prediction of the general theory of relativity."

"It was a joy to hear the news this morning. The Nobel recognizes results that built on Andrea's years of superb, precise, and forward-looking observations at the W.M. Keck Observatory," says Anneila Sargent (MS '67, PhD '77), Ira S. Bowen Professor of Astronomy, Emeritus, at Caltech. "It was clear from her student days at Caltech that Andrea had what it took to make her mark."

At Caltech, Ghez's PhD advisor was the late Gerry Neugebauer (PhD '60), formerly the Robert Andrews Millikan Professor of Physics, Emeritus, and a founder of the field of infrared astronomy. Ghez's PhD thesis looked at the frequency of multiple-star systems and stellar evolution using Caltech's Palomar Observatory. She was named a Caltech Distinguished Alumna in 2012.

At UCLA, where Ghez joined the faculty in 1994, she and her team began mapping stars in a region at the center of our galaxy known as Sagittarius A*, around which all the stars in the Milky Way orbit. Ghez and her co-winner Genzel independently developed methods to better see through the obscuring clouds of dust that block Earth's view of the heart of the galaxy. Ghez helped advance adaptive optics techniques used at the W. M. Keck Observatory in Hawaii. Adaptive optics corrects for the earth's turbulent atmosphere to create sharper images.

The work of Ghez and Genzel to map the orbits of stars around Sagittarius A* helped reveal "an extremely heavy, invisible object that pulls on the jumble of stars, causing them to rush around at dizzying speeds," according to the Nobel Prize press release. This research demonstrated that the central invisible object, which has a mass equivalent to that of 4 million suns, is a supermassive black hole. Supermassive black holes are much heftier than the stellar-mass ones sprinkled throughout galaxies; for instance, the Laser Interferometer Gravitational-wave Observatory (LIGO) recently detected the merging of two black holes that resulted in a new black hole of 142 solar masses.

"This is incredibly well-deserved recognition for Andrea's exceptionally careful work carried out over many decades," says Fiona Harrison, the Harold A. Rosen Professor of Physics and the Kent and Joyce Kresa Leadership Chair of the Division of Physics, Mathematics and Astronomy at Caltech. "She began developing techniques for high-angular resolution astronomical imaging while she was a graduate student here in physics, and she perfected the use of adaptive optics on the W. M. Keck telescopes, which led to the spectacular results for which she was recognized today."

Recently, Ghez and her team announced work that amounts to the "most comprehensive test of Albert Einstein's iconic general theory of relativity near the monstrous black hole at the center of our galaxy," according to a UCLA news release about the Nobel Prize announcement.

She is a member of the National Academy of Sciences and the American Academy of Arts and Sciences, and a MacArthur Fellow. Ghez, who is the fourth woman to win the Nobel Prize in Physics (the first was Marie Curie in 1903), was the first woman to receive the Royal Swedish Academy of Sciences' prestigious Crafoord Prize, and has received numerous other honors. In 2019, she was awarded an honorary degree by the University of Oxford.

To date, 40 Caltech alumni and faculty have won a total of 41 Nobel Prizes.