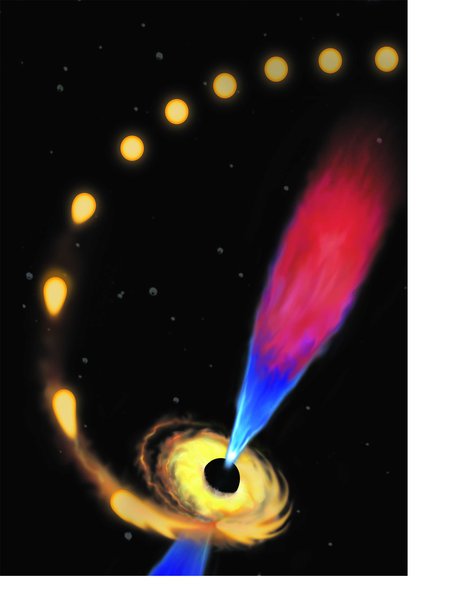 This illustration shows an artistâ€™s conception of a supermassive black hole tearing apart a star. As the stellar shreds spiral in toward the black hole, a jet of particles stream out at nearly the speed of light. X-ray emission is in blue while radio emission is in red. Serendipitously, the jets were beamed directly toward Earth. Credit: Amadeo Bachar
Tags:
astronomy & physics

Astronomers have discovered a supermassive black hole tearing a star to shreds. In late March, NASA's Swift satellite detected flares of X rays and gamma rays from a mysterious source about 3.9 billion light years away. To follow up on the strange signal, astronomers used the 40-meter dish at Caltech's Owens Valley Radio Observatory (OVRO), the Combined Array for Research in Millimeter-wave Astronomy (CARMA)—of which Caltech is a member institution—and other telescopes that observe in centimeter, millimeter, and radio wavelengths. The subsequent data showed that the source is most likely a star being ripped apart by a black hole millions of times more massive than the sun.

"This is a remarkable discovery," says John Carpenter, a senior research associate in astronomy at Caltech and executive director of OVRO. "We are likely witnessing the birth of a jet as a stray star is ripped apart by a massive black hole." The astronomers describe their results in the August 25 issue of the journal Nature.

When the stellar shreds spiral in toward the black hole, which sits at the center of a galaxy, they heat up and produce powerful jets of particles that stream out at nearly the speed of light. Astronomers have predicted that these violent events could happen, and they've seen them before, but only as bright flares in optical, ultraviolet, and X-ray wavelengths.

"When I first saw the CARMA detection, I literally fell out of my chair," says Ashley Zauderer, an astronomer at the Harvard-Smithsonian Center for Astrophysics who led the team. The astronomers say that this is the first time such a scenario—called a tidal disruption event—has been observed at radio wavelengths, suggesting that scanning the skies for similar radio signals could be a fruitful way to find more stars being devoured by a black hole.

To read more and to watch an animated video, click here.