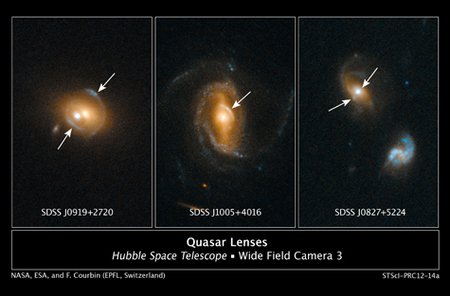 Astronomers have found celestial objects called quasars that bend and distort the light coming from galaxies behind them. The discovery may finally allow astronomers to determine the masses of galaxies that host quasars.

"No one has done this before," says George Djorgovski, a professor of astronomy at Caltech and member of the research team. "It would be surprising—but very interesting—if these galaxies turn out to be systematically different from the general galaxy population."

This light-bending effect, called gravitational lensing, is normally seen in the reverse orientation: foreground galaxies distorting the light of background quasars. (Caltech's Fritz Zwicky was the first to propose that gravitational lensing could be used to study distant clusters of galaxies in 1937, but it wasn't until 1979 that astronomers observed the phenomenon in a galaxy cluster that bent the light of a background quasar.)

The research, led by astronomers at the École Polytechnique Fédérale de Lausanne (EPFL) in Switzerland, is described in a paper accepted for publication in the journal Astronomy and Astrophysics. The team discovered the first light-bending quasar in 2010, but now they have found three more—and the data is even better.

Quasars are the active centers of galaxies with supermassive black holes—those millions or billions of times more massive than our sun—that gobble up surrounding gas and dust. The material heats up as it spirals into the black hole, churning out enormous amounts of energy, making quasars some of the most powerful and brightest objects in the universe.

They're so bright, in fact, that they outshine their host galaxies, making it nearly impossible for astronomers to see anything around them. But by using a combination of adaptive optics—a technique that improves image resolution by removing the blur from the atmosphere—at Keck Observatory and the Hubble Space Telescope, the astronomers were able to detect faint arcs around the quasar. The arcs are the background galaxies distorted by the foreground quasars.

The brightness of quasars prevents astronomers from measuring the masses of their host galaxies with traditional approaches, which are based on the galaxies' internal dynamics—for example, how the stars move. But the light-bending quasars provide a different way to determine their host-galaxy masses. The more massive the host galaxies, the more they warp the light emitted by the background galaxies. By measuring how much the light bends, astronomers can infer the host galaxies' masses.

In addition to Djorgovski, the other Caltech researcher is Ashish Mahabal, a staff scientist in computational astronomy. Other researchers include Frédéric Courbin, Cécile Faure, François Rerat, Malte Tewes, and Georges Meylan of EPFL; Daniel Stern of NASA's Jet Propulsion Laboratory; Todd Boroson of National Optical Astronomy Observatories; Dominique Sluse of Bonn University; and Dheeraj Pasham of the University of Maryland.