Astronomers Find Picture of Hefty Star Before it Blew Up 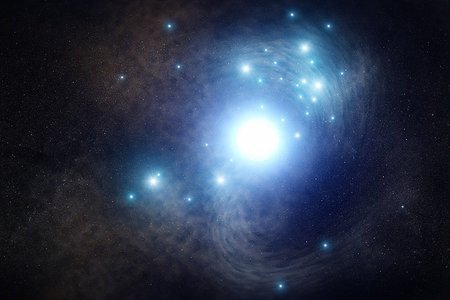 This artist's concept illustrates a possible progenitor star to supernova 2017ein—a blue supergiant star that once existed inside a cluster of young stars in the spiral galaxy NGC 3938, located 65 million light-years away. It would have exploded as a supernova in 2017. Credit: NASA, ESA, and J. Olmsted (STScI) 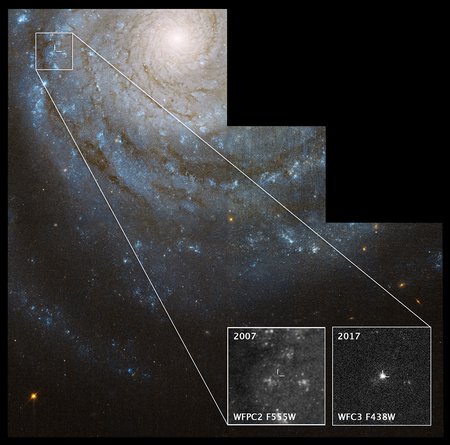 This NASA Hubble Space Telescope image of the nearby spiral galaxy NGC 3938 shows the location of supernova 2017ein, in a spiral arm near the bright core. The location of its candidate progenitor star is shown in the left-hand pullout box at the bottom of the image, which was taken in 2007. The bright object in the box at right is the supernova, taken by Hubble in 2017, shortly after the stellar blast. Credit: NASA, ESA, S. Van Dyk (Caltech), and W. Li (University of California)
Tags:
astronomy & physics

Supernovas are the deathly explosions of massive stars. One of the ways that astronomers look for clues about how these stars blow up is to go hunting for what's known as the progenitor to a supernova—the star before it died. They comb through archival telescope images and try to pinpoint the location and identity of the star before it blasted apart. Now, for the first time, a Caltech-led team has likely found such a progenitor for a supernova class known as "type Ic" (pronounced "one-C"). Of all the classes of supernovas, this is the only one that did not have a known progenitor until now and thus its identification was thought of as something of a Holy Grail by astronomers.

The type Ic supernova, called SN 2017ein, was initially discovered in May 2017 by researchers using the Tenagra Observatories in Arizona. It is located in a spiral galaxy called NGC 3938, about 65 million light-years away. The Caltech astronomy team was able to track down this supernova's progenitor using archival images from NASA's Hubble Space Telescope, taken in 2007.

"An alert was sent out when the supernova was initially found," says Schuyler Van Dyk, a staff scientist at IPAC, a science and data center for astronomy at Caltech. "You can't sleep once that happens and have to mobilize to try to find the progenitor to the explosion. Within a few weeks after the supernova was discovered, we found a candidate using both new and archival Hubble images." Van Dyk is lead author of a paper about the findings, published this summer in The Astrophysical Journal. "The new images were essential for pinpointing the candidate progenitor's location."

The progenitor is hot and luminous and is thought to be either a single hefty star 48 or 49 times the mass of our sun or a massive binary star system in which the star that exploded weighs between 60 and 80 solar masses.

"Type Ic supernovas occur with the most massive of stars," says Van Dyk. "But we were surprised by how massive this one appears to be, and especially by the possibility of a massive double-star system as the progenitor. Although theories have existed for the last three decades that type Ic supernovas could be the explosions of very massive single stars, alternative, more recent theories point toward stars of lower mass in binary systems as being the origins of these explosions."

Other supernova classes include type Ia, which occur when white dwarfs in binary star systems explode (cosmologists used these to discover that our universe is not only expanding but accelerating apart). Type II, type Ib, and Ic supernovas occur when massive stars collapse at the end of their lives, forming neutron stars or black holes. Type Ib and Ic differ from type II in that their progenitor stars lose outer envelopes of material around their central cores before exploding. Type Ib and Ic supernovas differ from each other slightly in chemical composition.

Piecing together how each of these supernova types occurs provides a better understanding of the evolution of the most massive stars in our universe.

"The origins of such explosions are relevant to the entire astronomical community, not just supernova researchers," says Ori Fox from the Space Telescope Science Institute (STScI), a co-author on the study. "The results have implications on ideas from star formation to stellar evolution and feedback into the galaxy."

"Astronomers have been trying to find this progenitor for some 20 years," says Van Dyk. "Humans wouldn't be here without supernovas—they make the chemical elements from which we are made."

The astronomers say that they should be able to confirm with certainty whether they have identified the correct progenitor to the type Ic explosion within a few years, using Hubble or the upcoming NASA James Webb Space Telescope, set to launch in 2021. As the supernova fades as expected, the astronomers will have a clearer view of the area around it. If the luminous progenitor candidate was correctly identified in archival images, then it will have vanished and should not be seen in the new images. If the scientists still see the candidate progenitor, that means it was misidentified and some other hidden star was the culprit.

The study, titled, "SN 2017ein and the Possible First Identification of a Type Ic Supernova Progenitor," was funded by NASA, the National Science Foundation, the Tabasgo Foundation, the Christopher R. Redlich Fund, and the Miller Institute for Basic Research in Science.