Astronomers Observe Planets Around Another Star Like Never Before 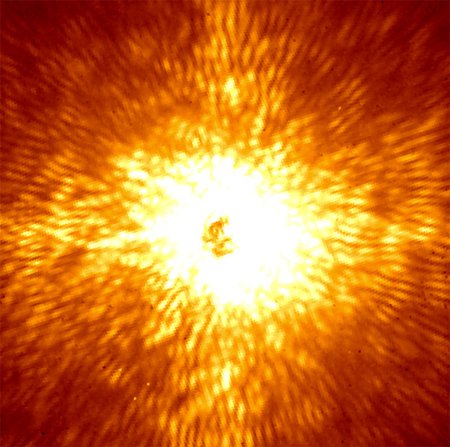 In this image of the star HR 8799, most of the light from the star itself has been removed, leaving behind a "speckle" pattern of light. The Project 1640 instrument then removes the speckles to reveal the planets previously hidden in the glare. Credit: Project 1640 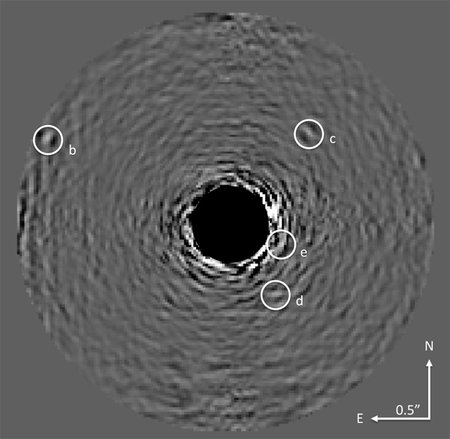 This image of the HR 8799 planetary system shows the four planets around its star, which is covered by the black circle at the center. Credit: Project 1640 This video shows the location of the star HR 8799 in relation to our solar system. 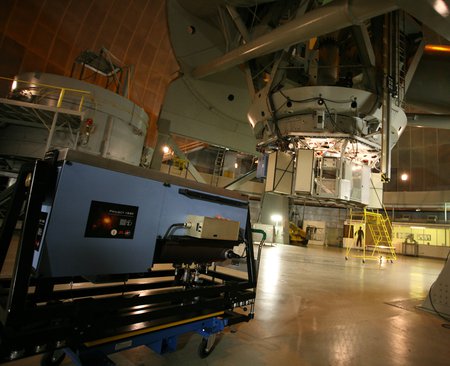 The Project 1640 instrument in the telescope dome of the 200-inch Hale Telescope at Caltech's Palomar Observatory, prior to being installed for observations. Credit: Palomar Observatory/S. Kardel
Tags:
astronomy & physics, earth & planetary science

PASADENA, Calif.—Thanks to a new high-tech gadget, astronomers have observed four planets orbiting a star relatively close to the sun in unprecedented detail, revealing the roughly ten-Jupiter-mass planets to be among the most exotic ones known.

The team, which includes several researchers from the California Institute of Technology (Caltech), describes its findings in a paper accepted for publication by the Astrophysical Journal.

The findings were made possible by a first-of-its-kind telescope imaging system that allowed the astronomers to pick out the planets amidst the bright glare of their parent star and measure their spectra—the rainbows of light that reveal the chemical signatures of planetary atmospheres. The system, dubbed Project 1640, enables astronomers to observe and characterize these kinds of planetary systems quickly and routinely, which has never been done before, the researchers say.

"These warm, red planets are unlike any other known objects in our universe," says Ben R. Oppenheimer, an astronomer at the American Museum of Natural History and the paper's lead author. And the planets are very different from one another as well. "All four planets have different spectra and all four are peculiar."

Astronomers had previously taken images of these four planets, which orbit a star called HR 8799, located 128 light years away. But because a star's light is tens of millions to billions of times brighter than the light from that star's own planets, distinguishing planet light from starlight so as to directly measure the spectra from the planets alone is difficult. "It's like taking a single picture of the Empire State Building from an airplane that reveals the height of the building but also a bump on the sidewalk next to it that is as high as a couple of bacteria," Oppenheimer explains. "Furthermore, we've been able to do this over a range of wavelengths in order to make a spectrum."

In the past, astronomers have been able to take spectra of some planets that pass in front of, or transit, their stars. But with Project 1640, which uses the Hale Telescope at Caltech's Palomar Observatory in Southern California, astronomers can now take the direct spectra of planets orbiting other stars—called exoplanets—that are not transiting. The device blocks the otherwise overwhelming starlight, picks out the faint specks that are planets, and obtains their spectra.  Project 1640 allowed the team to take spectra of all four of the planets around HR 8799 simultaneously, which had never been done for any planetary system before.

The planets around HR 8799 are at about the same distance from that star as the solar system's gas giants (Jupiter, Saturn, Uranus, and Neptune) are from our sun. But since it's easier to detect transiting planets that are close to their stars, the transiting systems that astronomers have observed have small orbits—often smaller than Mercury's. The new results, therefore, represent the first spectra to be taken of gas giants located so far from their stars—a distance at which the influence of the stars' radiation, flares, and other features are weaker.

"We are now technically capable of obtaining spectra of giant planets in planetary systems like our own, improving on the close-in transiting planet studies done previously," says Lynne Hillenbrand, professor of astronomy at Caltech and a coauthor of the paper. And what the spectra show is that the planets are quite strange. "A remarkable thing about these planets is their unexpected spectroscopic diversity," Hillenbrand says.

One of the most striking abnormalities is an apparent chemical imbalance. Under most circumstances, ammonia and methane should naturally coexist in a planet's atmosphere—where there is one, there is usually the other—unless they are generated in extremely cold or hot environments. Yet the spectra of the HR 8799 planets, all of which have "lukewarm" temperatures of about 1000 Kelvin (1340 degrees Fahrenheit), either have methane or ammonia alone, with little or no sign of their chemical partner. There is also evidence of other chemicals such as acetylene—which has never before been detected on any exoplanet—and carbon dioxide.

The planets also are "redder"—they emit longer wavelengths of light—than celestial objects with similar temperatures. This could be explained by the presence of significant but patchy cloud cover on the planets, the authors say.

HR 8799 itself is very different from our sun, with 1.6 times its mass and five times its brightness. The brightness of this distant star can vary by as much as 8 percent over a period of two days; it produces about 1,000 times more ultraviolet light than the sun. All of these factors could induce complex weather and sooty hazes that would, in turn, cause periodic changes in the spectra.

"The spectra of these four worlds clearly show that they are far too toxic and hot to sustain life as we know it," says coauthor Ian Parry, a senior lecturer at the Institute of Astronomy, Cambridge University. "But the really exciting thing is that, one day, the techniques we've developed will give us our first secure evidence of the existence of life on a planet outside our solar system."

The techniques used by Project 1640 require the coordinated operation of four major instruments: the world's most advanced adaptive-optics system, which can make millions of tiny adjustments to the device's two six-inch mirrors every second; a coronagraph that optically dims the star but not other celestial objects in the field of view; an imaging spectrograph that records 30 images in a rainbow of colors simultaneously; and a specialized wavefront sensor that distinguishes between residual starlight that sneaks through the coronagraph and light from planets, allowing scientists to filter out background starlight more effectively.

With these instruments working in concert, the project is able to reveal celestial objects 1 million to 10 million times fainter than the star at the center of one of its images, with only an hour of observations. It is also capable of measuring the orbital motion of objects.

"Our young century has seen seminal advances in exoplanet science, but almost exclusively from indirect observations," says Richard Dekany, a coauthor and associate director for development for Caltech Optical Observatories. "Project 1640 has now added to this revolution the scientific gold standard: directly measured spectra of young giant planets. Our initial findings suggest each of these strange and wonderful giant planets may have a unique story to share."

The researchers are already collecting more data on this system so as to look for changes in the planets over time; they are also surveying other young stars. During its three-year survey at Palomar, which started in June, Project 1640 aims to survey 200 stars within about 150 light years of our solar system.

"In the 19th century, it was thought impossible to know the composition of stars, but the invention of astronomical spectroscopy has revealed detailed information about nearby stars and distant galaxies," says Charles Beichman, executive director of the NASA Exoplanet Science Institute at Caltech. "Now, with Project 1640, we are beginning to turn this tool to the investigation of neighboring exoplanets to learn about the composition, temperature, and other characteristics of their atmospheres."

The title of the the Astrophysical Journal paper is "Reconnaissance of the HR 8799 exosolar system I: Near IR spectroscopy." In addition to Hillenbrand, Dekany, and Beichman, the other Caltech authors are postdocs Christoph Baranec and Sasha Hinkley; former postdoc Justin Crepp (now at the University of Notre Dame); and programmer David Hale, along with a similar number of JPL authors. This work was supported by the National Science Foundation and NASA. Additional funding sources for Project 1640 are listed here.

This story is adapted from a press release by Kendra Snyder of the American Natural History Museum.