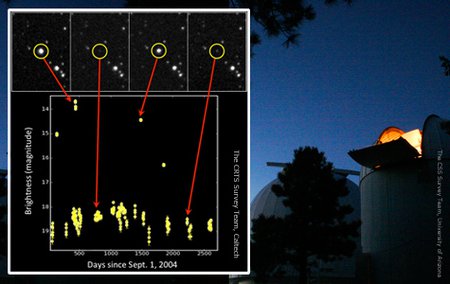 An image of a dwarf nova, which is a star system where material flows from a red giant star to a dense, compact star called a white dwarf. The flowing material triggers explosions that cause the system to flare up as seen from Earth. The graph shows the change in brightness of this system over a period of seven years. The images at the top show the nova at its brightest and dimmest, as indicated in the plot. Credit: The CRTS Survey Team, Caltech
Tags:
astronomy & physics

PASADENA, Calif.—Astronomers from the California Institute of Technology (Caltech) and the University of Arizona have released the largest data set ever collected that documents the brightening and dimming of stars and other celestial objects—two hundred million in total.

The night sky is filled with objects like asteroids that dash across the sky and others—like exploding stars and variable stars-that flash, dim, and brighten. Studying such phenomena can help astronomers better understand the evolution of stars, massive black holes in the centers of galaxies, and the structure of the Milky Way. These types of objects were also essential for the recent discovery of dark energy-the mysterious energy that dominates the expansion of the universe—which earned last year's Nobel Prize.

Using the Catalina Real-Time Transient Survey (CRTS), a project led by Caltech, the astronomers systematically scanned the heavens for these dynamic objects, producing an unprecedented data set that will allow scientists worldwide to pursue new research.

"Exploring variable objects and transient phenomena like stellar explosions is one of the most vibrant and growing research areas in astrophysics," says S. George Djorgovski, professor of astronomy at Caltech and principal investigator on the CRTS. "In many cases, this yields unique information needed to understand these objects."

The new data set is based on observations taken with the 0.7-meter telescope on Mt. Bigelow in Arizona. The observations were part of the Catalina Sky Survey (CSS), a search for Near-Earth Objects (NEOs)—asteroids that may pose a threat to Earth-conducted by astronomers at the University of Arizona. By repeatedly taking pictures of large swaths of the sky and comparing these images to previous ones, the CRTS is able to monitor the brightness of about half a billion objects, allowing it to search for those that dramatically brighten or dim. In this way, the CRTS team identified tens of thousands of variables, maximizing the science that can be gleaned from the original data.

The new data set contains the so-called brightness histories of a total of two hundred million stars and other objects, incorporating over 20 billion independent measurements. "This set of objects is an order of magnitude larger than the largest previously available data sets of their kind," says Andrew Drake, a staff scientist at Caltech and lead author on a poster to be presented at the meeting of the American Astronomical Society in Austin on January 12. "It will enable many interesting studies by the entire astronomical community."

One of the unique features of the survey, Drake says, is that it emphasizes an open-data philosophy. "We discover transient events and publish them electronically in real time, so that anyone can follow them and make additional discoveries," he explains.

"It is a good example of scientific-data sharing and reuse," Djorgovski says. "We hope to set an example of how data-intensive science should be done in the 21st century."

The data set include over a thousand exploding stars called supernovae, including many unusual and novel types, as well as hundreds of so-called cataclysmic variables, which are pairs of stars in which one spills matter onto another, called a white dwarf; tens of thousands of other variable stars; and dwarf novae, which are binary stars that dramatically change in brightness.

"We take hundreds of images every night from each of our telescopes as we search for hazardous asteroids," adds Edward Beshore, principal investigator of the University of Arizona's asteroid-hunting CSS. "As far back as 2005, we were asking if this data could be useful to the community of astronomers. We are delighted that we could forge this partnership. In my estimation, it has been a great success and is a superb example of finding ways to get greater value from taxpayers' investments in basic science."

In addition to Djorgovski, Drake, and Beshore, the team includes staff scientist Ashish Mahabal, computational scientist Matthew Graham, postdoctoral scholar Ciro Donalek, and research scientist Roy Williams from Caltech. Researchers from other institutions include Steve Larson, Andrea Boattini, Alex Gibbs, Al Grauer, Rik Hill, and Richard Kowalski from the University of Arizona; Mauricio Catelan from Universidad Catholica in Chile; Eric Christensen from the Gemini Observatory in Hawaii; and Jose Prieto from Princeton University. The Caltech research is supported by the National Science Foundation. The work done at the University of Arizona is supported by NASA.