Bring In the (Nano) Noise 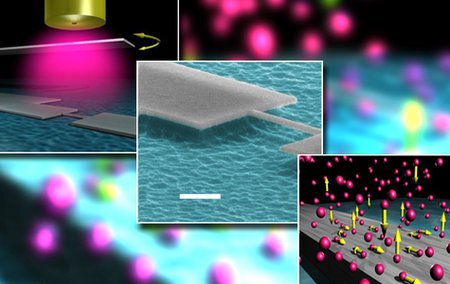 At the forefront of nanotechnology, researchers design miniature machines to do big jobs, from treating diseases to harnessing sunlight for energy. But as they push the limits of this technology, devices are becoming so small and sensitive that the behavior of individual atoms starts to get in the way. Now Caltech researchers have, for the first time, measured and characterized these atomic fluctuations—which cause statistical noise—in a nanoscale device.

Physicist Michael Roukes and his colleagues specialize in building devices called nanoelectromechanical systems—NEMS for short—which have a myriad of applications. For example, by detecting the presence of proteins that are markers of disease, the devices can serve as cheap and portable diagnostic tools—useful for keeping people healthy in poor and rural parts of the world. Similar gadgets can measure toxic gases in an enclosed room, providing a warning for the inhabitants.

Two years ago, Roukes's group created the world's first nanomechanical mass spectrometer, enabling the researchers to measure the mass of a single biological molecule. The device, a resonator that resembles a tiny bridge, consists of a thin strip of material 2 microns long and 100 nanometers wide that vibrates at a resonant frequency of several hundred megahertz. When an atom is placed on the bridge, the frequency shifts in proportion to the atom's mass.

But with increasingly sensitive devices, the random motions of the atoms come into play, generating statistical noise. "It's like fog or smoke that obscures what you're trying to measure," says Roukes, who's a professor of physics, applied physics, and bioengineering. In order to distinguish signal from noise, researchers have to understand what's causing the ruckus.

In their experiment, the researchers sprayed xenon gas onto a bridgelike resonator that's similar to the one they used to weigh biological molecules. The xenon can accumulate in a one-atom-thick layer on the surface, like marbles covering a table. In such an arrangement—a so-called monolayer—the atoms are packed so tightly together that they don't have much room to move. But to study noise, the researchers created a submonolayer, which doesn't have enough atoms to completely cover the surface of the resonator. Because of the extra space, the atoms have more freedom to move around, which generates more noise in the system.

The atoms in the submonolayer do one of three things: they stick to the surface, become unstuck and fly off, or slide off. Or in physics speak, the atoms adsorb, desorb, or diffuse. Previous theories had predicted that the noise is most likely due to atoms sticking and unsticking. But now that the researchers were able to observe what actually happens in such a device, they discovered that diffusion dominates the noise. What's noteworthy, the researchers say, is that they found that when an atom slides along the surface of the resonator, it causes the device's vibrating frequency to fluctuate. This is the first time anyone has measured this effect, since previous devices were not sensitive to this sort of diffusion. They also found new power laws in the spectra of noise frequencies—quantitative descriptions of the frequencies at which the atoms vibrate.

There's still a lot more to learn about the physics of this noise, the researchers say. Ultimately, they will need to figure out how to get rid of it or suppress it to build better NEMS devices. But understanding this noise—by measuring the random movement of individual atoms—is itself fascinating science, Roukes says. "It's a new window into how things work in the nanoscale world."