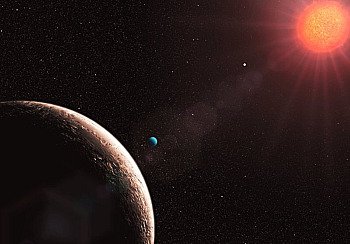 PASADENA, Calif.-Astronomers from the California Institute of Technology (Caltech) and other institutions, using the highly sensitive 10-meter Keck I telescope atop Hawaii's Mauna Kea, have detected an extrasolar planet with a mass just four times that of Earth. The planet, which orbits its parent star HD156668 about once every four days, is the second-smallest world among the more than 400 exoplanets (planets located outside our solar system) that have been found to date. It is located approximately 80 light-years from Earth in the direction of the constellation Hercules.

Dubbed HD 156668b, the planet-a so-called "super Earth" that would glow with blast-furnace-like temperatures-offers a tantalizing hint of discoveries yet to come. Astronomers hope those discoveries will include Earth-size planets located in the "habitable zone," the area roughly the distance from the earth to the sun, and thus potentially favorable to life.

HD 156668b was discovered with the radial velocity or wobble method, which relies on Keck's High Resolution Echelle Spectrometer (HIRES) to spread light collected from the telescope into its component wavelengths or colors, producing a spectrum. As the planet orbits the star, it causes the star to move back and forth along our line of sight, which causes the starlight to become redder and then bluer in a periodic fashion.

The color shifts give astronomers the mass of the planet and the characteristics of its orbit, such as how much time it takes to orbit the star. The majority of the exoplanets discovered have been found in this way.

The discovery of low-mass planets like HD 156668b has become possible due to the development of techniques to watch stars wobble with increasing clarity, and of software that can pluck the signals of increasingly smaller planets from amid the 'noise' made by their pulsating, wobbling parent stars.

"If the stars themselves have imperfections and are unstable, their wobbling would cause jumps in velocity that could mimic or hide the existence of a planet," says John A. Johnson, assistant professor of astronomy at Caltech and codiscoverer of the new planet along with Andrew Howard and Geoff Marcy of the University of California at Berkeley, Debra Fischer of Yale University, Jason Wright of Penn State University, and the members of the California Planet Survey collaboration.

"We have been doing simulations to understand the astrophysics of these imperfections, and how to distinguish them from the signals from a planet," says Johnson. "We hope to use these simulations to design even better observing strategies and data-analysis techniques."

The discovery of a planet that is comparable in size to Earth and found within the habitable zone, however, "will require a great deal of work," he says. "If we could build the best possible radial-velocity instrument tomorrow, we might have answers in three years, and a solid census of Earthlike planets within a decade. We'll need gigantic leaps in sensitivity to get there, and we're hot on the trail."

Johnson is also currently building a new camera for the 60-inch telescope at Caltech's Palomar Observatory. The camera will allow astronomers to search for the passages-or transits-of low-mass planets like HD156668 across the faces of their stars.

"If we catch the planet in transit, we can measure the planet's radius and density, and therefore address the question of whether the planet has a composition more like Earth, with a solid surface and thin atmosphere, or is a miniature version of Neptune, with a heavy gaseous atmosphere," he says.

The Keck I telescope is part of the Keck Observatory, a joint effort of Caltech and the University of California.