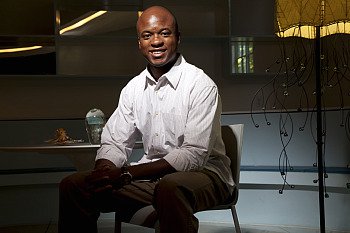 PASADENA, Calif.—John O. Dabiri, a fluid-dynamics expert at the California Institute of Technology (Caltech) whose studies of schooling fish have inspired new ideas for wind farming, was named a MacArthur Fellow today, and awarded a five-year, $500,000 "no strings attached" grant. Each year, the John D. and Catherine T. MacArthur Foundation awards the unrestricted fellowships—also known as "genius" grants—to individuals who show "exceptional creativity in their work and the prospect for still more in the future," according to the Foundation's website.

Unlike most MacArthur recipients—who are awakened with an early morning phone call announcing their prize—Dabiri, who is an associate professor of aeronautics and bioengineering at Caltech, received an email.

"The Foundation had one of the digits incorrect in my cell phone number, so they called the wrong guy," Dabiri says. "The email asked me to call the Foundation immediately, but since I had always heard that the winners receive a phone call, I assumed they just wanted my help getting in touch with a colleague. That's when I heard the good news—and I was completely shocked! Between proposal deadlines, papers, and preparing lecture notes, this wasn't at all on my radar."

Dabiri is the head of Caltech's Biological Propulsion Laboratory, where he and his colleagues examine the mechanics and dynamics of biological propulsion, which has applications for the design of new types of biologically inspired propulsion systems. Although Dabiri is notably a nonswimmer, and admits to sinking "like a stone" in the water, much of his work is focused on jellyfish, which he studies in a 40-meter-long, 8,000-gallon water tunnel at Caltech. Jellyfish can slice through the water with extreme efficiency and may generate high-powered jets when under attack. One outcome of this work has been the design of propellers that create vortex rings like those of jellyfish. In other research, Dabiri and his colleagues have developed a model that explains how some of the ocean's tiniest swimming animals may have a huge impact on large-scale ocean mixing.

Dabiri also is interested in developing new and better ways of harnessing wave and wind energy as power sources. "I became inspired by observations of schooling fish, and the suggestion that there is constructive hydrodynamic interference between the wakes of neighboring fish," he says. During these observations, Dabiri noticed that some of the vortices left behind by fish swimming in a school rotate clockwise, while others rotate counter-clockwise. He realized this could have relevance to wind farms, which are commonly hampered by a lack of space.

The large-propeller horizontal-axis wind turbines most commonly seen on wind farms require a substantial amount of land to perform properly; in contrast, vertical turbines, which use a vertical rotor, can be placed on smaller plots of land in a denser pattern. Dabiri and his colleagues determined that placing vertical-axis turbines in arrays with certain strategic configurations might allow the turbines to work more efficiently as a result of their relationship to others around them—just as in schools of fish.

Such configurations of vertical turbines are currently being put to the test on an experimental wind farm under construction in the high desert north of Los Angeles.

Dabiri, who holds a bachelor's degree from Princeton University, obtained a Master of Science degree in aeronautics from Caltech in 2003 and, in April 2005, a PhD in bioengineering with a minor in aeronautics from Caltech. In May 2005, he joined the Caltech faculty as an assistant professor; he was promoted to associate professor in 2009. In 2008, Dabiri was the recipient of an Office of Naval Research Young Investigator award for research in bioinspired propulsion, and was named one of Popular Science magazine's "Brilliant 10" young scientists to watch; in 2009, he was given a Presidential Early Career Award for Scientists and Engineers.

"We are proud and delighted that John has received this acknowledgment of his innovative approach to research and his engineering education and training at Caltech," says Ares J. Rosakis, the Theodore von Kármán Professor of Aeronautics, professor of mechanical engineering, and chair of the Division of Engineering and Applied Science.

"I'm extremely grateful for the MacArthur award, but it is the result of the efforts of many people," Dabiri says. "I've been blessed with generous mentors at every stage of life: from my parents, to my professors at Princeton, to Mory Gharib here at Caltech. It's also a credit to the students and postdocs in my lab, who work very hard on challenging and often risky research topics, and to my collaborators—especially biologists like Jack Costello at Providence College and Sean Colin at Roger Williams University—who gave me a deeper appreciation for the beautiful subtleties of jellyfish. I hope they all know how grateful I am."

"John has this extraordinary talent for making complex science and engineering issues simple through his deep understanding of these subjects," says Gharib, the Hans W. Liepmann Professor of Aeronautics, professor of bioinspired engineering, and Caltech's vice provost. "Getting ideas from jellyfish to design better propulsion systems requires an exceptionally creative mind. Receiving the MacArthur Fellowship award for his work on aquatic propulsion is a fantastic achievement for a nonswimmer."

"As for how I'll spend the money, I'm going to have to pray about that," Dabiri says. "This is an opportunity I never imagined I would have, and I want to make the most of it."

He does, however, have one idea: "I think I'll start with swimming lessons, so that I can finally get up close and personal with the jellyfish I've been studying from afar."

For more information on the 2010 MacArthur Fellows, visit the Foundation website at www.macfound.org.