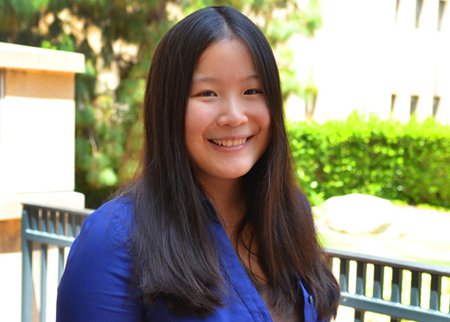 Caltech graduate student Melissa Yeung has been selected as one of 21 students nationally to receive a Department of Energy (DOE) Computational Science Graduate Fellowship this year. The honor covers up to four years of support for graduate studies in fields that focus on the use of high-performance computing technology to solve complex problems in science and engineering.

The DOE Computational Science Graduate Fellowships are jointly funded by the Office of Science and National Nuclear Security Administration's Office of Defense Programs. In addition to covering tuition and providing an annual stipend, the award gives students an opportunity to spend a summer at a DOE national laboratory doing computational research in a field that is unrelated to their thesis work.

As part of Caltech's Applied Geometry Lab, Yeung studies an area of mathematics known as discrete differential geometry, which has diverse applications in such fields as engineering, computer animation, product design, and medicine. As a second-year graduate student in mathematics, Yeung says she feels incredibly fortunate to be at Caltech, where she has been given the freedom to work across divisions; although she is enrolled in the Division of Physics, Mathematics and Astronomy, she is now being advised by Mathieu Desbrun, professor of computing and mathematical sciences from the Division of Engineering and Applied Science.

"'What do you get when a mathematician and a computer scientist meet?' is usually the beginning of a bad joke. At Caltech, it's instead the start of a great collaboration," says Desbrun, who is also the director of Computing and Mathematical Sciences and Information Science and Technology. "Working with Melissa offers new perspectives that computer scientists like myself are not frequently presented with."

Yeung is the second student from Caltech's Applied Geometry Lab to receive a DOE Computational Science Graduate Fellowship in recent years. In 2010, Evan Gawlik, who completed his senior thesis with Desbrun, also received the honor.

Yeung traces the beginnings of her interest in computational geometry to a lecture that she happened to pop into at a conference a few months before she came to Caltech. In that lecture, she heard about how computational topology could be used to analyze complex datasets, identifying underlying shape characteristics that bring new understanding to a problem.

Shortly after arriving at Caltech, while flipping through the course catalog, Yeung came across a course offered by Desbrun on discrete differential geometry and started sitting in on the lectures. And that was it: she was hooked. "I think math is beautiful, but at times it seems that the more math I do, the more disconnected from the world I feel. It has been really gratifying for me to see all of this math that I thought was so incredibly abstract so immediately applicable."