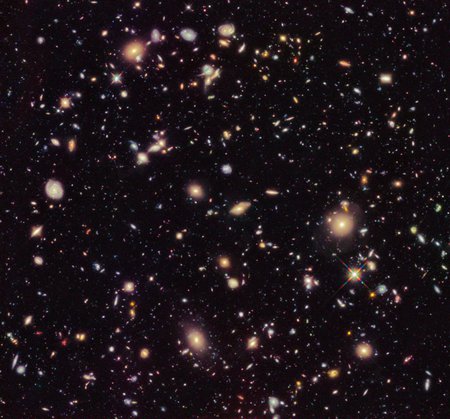 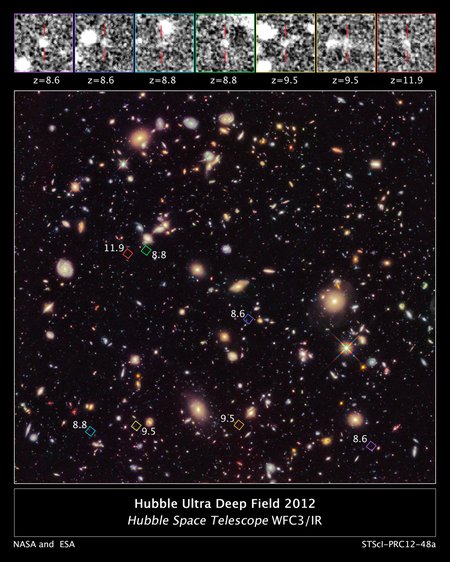 The colored squares in the main image outline the locations of the newly discovered galaxies. Enlarged views of each galaxy are shown in the black-and-white images. Each galaxy is labeled with the redshift (z), which measures how much a galaxy's light has been stretched by the universe's expansion. The galaxy observed at a redshift of 11.9 may be the distance-record breaker, seen as it appeared 380 million years after the Big Bang. (Full image) Credit: NASA/ESA/Caltech-R. Ellis/UDF2012 Team

This timeline shows the evolution of the universe since the Big Bang. The new observations, labeled "Hubble 2012," explored the deepest reaches of the cosmos that has ever been studied with Hubble, going back about 13.4 billion years. Previously, the universe was in the so-called Dark Ages, before there were any stars to light up the cosmos. The dashed line labeled Hubble 2009 represents the last set of observations of HUDF. (Full image) Credit: NASA/ESA
Tags:
astronomy & physics

PASADENA, Calif.—A team of astronomers led by the California Institute of Technology (Caltech) has used NASA's Hubble Space Telescope to discover seven of the most primitive and distant galaxies ever seen.

The new observations span a period between 350 million and 600 million years after the Big Bang and represent the first reliable census of galaxies at such an early time in cosmic history, the team says. The astronomers found that the number of galaxies steadily increased as time went on, supporting the idea that the first galaxies didn't form in a sudden burst but gradually assembled their stars.

Because it takes light billions of years to travel such vast distances, astronomical images show how the universe looked during the period, billions of years ago, when that light first embarked on its journey. The farther away astronomers peer into space, the further back in time they are looking.

In the new study, which was recently accepted for publication in the Astrophysical Journal Letters, the team has explored the deepest reaches of the cosmos—and therefore the most distant past—that has ever been studied with Hubble.

"We've made the longest exposure that Hubble has ever taken, capturing some of the faintest and most distant galaxies," says Richard Ellis, the Steele Family Professor of Astronomy at Caltech and the first author of the paper. "The added depth and our carefully designed observing strategy have been the key features of our campaign to reliably probe this early period of cosmic history."

The results are the first from a new Hubble survey that focused on a small patch of sky known as the Hubble Ultra Deep Field (HUDF), which was first studied nine years ago. The astronomers used Hubble's Wide Field Camera 3 (WFC3) to observe the HUDF in near-infrared light over a period of six weeks during August and September 2012.

To determine the distances to these galaxies, the team measured their colors using four filters that allow Hubble to capture near-infrared light at specific wavelengths. "We employed a filter that has not been used in deep imaging before, and undertook much deeper exposures in some filters than in earlier work, in order to convincingly reject the possibility that some of our galaxies might be foreground objects," says team member James Dunlop of the Institute for Astronomy at the University of Edinburgh.

The carefully chosen filters allowed the astronomers to measure the light that was absorbed by neutral hydrogen, which filled the universe beginning about 400,000 years after the Big Bang. Stars and galaxies started to form roughly 200 million years after the Big Bang. As they did, they bathed the cosmos with ultraviolet light, which ionized the neutral hydrogen by stripping an electron from each hydrogen atom. This so-called "epoch of reionization" lasted until the universe was about a billion years old.

If everything in the universe were stationary, astronomers would see that only a specific wavelength of light was absorbed by neutral hydrogen. But the universe is expanding, and this stretches the wavelengths of light coming from galaxies. The amount that the light is stretched—called the redshift—depends on distance: the farther away a galaxy is, the greater the redshift.

As a result of this cosmic expansion, astronomers observe that the absorption of light by neutral hydrogen occurs at longer wavelengths for more distant galaxies. The filters enabled the researchers to determine at which wavelength the light was absorbed; this revealed the distance to the galaxy—and therefore the period in cosmic history when it is being formed. Using this technique to penetrate further and further back in time, the team found a steadily decreasing number of galaxies.

"Our data confirms that reionization is a drawn-out process occurring over several hundred million years with galaxies slowly building up their stars and chemical elements," says coauthor Brant Robertson of the University of Arizona in Tucson. "There wasn't a single dramatic moment when galaxies formed; it's a gradual process."

The new observations—which pushed Hubble to its technical limits—hint at what is to come with next-generation infrared space telescopes, the researchers say. To probe even further back in time to see ever more primitive galaxies, astronomers will need to observe in wavelengths longer than those that can be detected by Hubble. That's because cosmic expansion has stretched the light from the most distant galaxies so much that they glow predominantly in the infrared. The upcoming James Webb Space Telescope, slated for launch in a few years, will target those galaxies.

"Although we may have reached back as far as Hubble will see, Hubble has, in a sense, set the stage for Webb," says team member Anton Koekemoer of the Space Telescope Science Institute in Baltimore. "Our work indicates there is a rich field of even earlier galaxies that Webb will be able to study."

The title of the Astrophysical Journal Letters paper is, "The Abundance of Star-Forming Galaxies in the Redshift Range 8.5 to 12: New Results from the 2012 Hubble Ultra Deep Field Campaign." In addition to Ellis, Dunlop, Robertson, and Koekemoer, the other authors on the Astrophysical Journal Letters paper are Matthew Schenker of Caltech; Ross McLure, Rebecca Bowler, Alexander Rogers, Emma Curtis-Lake, and Michele Cirasuolo of the Institute for Astronomy at the University of Edinburgh; Yoshiaki Ono and Masami Ouchi of the University of Tokyo; Evan Schneider of the University of Arizona; Daniel Stark of the University of Cambridge; Stéphane Charlot of the Institut d'Astrophysique de Paris; and Steven Furlanetto of UCLA. The research was supported by the Space Telescope Science Institute, the European Research Council, the Royal Society, and the Leverhulme Trust.