A new Caltech-built instrument at the W. M. Keck Observatory has captured its first spectral image.

The "first-light" image from NIRES is of NGC 7027, a planetary nebula. The NIRES spectrum shows the near-IR spectrum of this nebula dominated by emission lines of hydrogen and helium. The direct image shows NBC 7027 at 2.2 microns. Credit: W.M. Keck Observatory 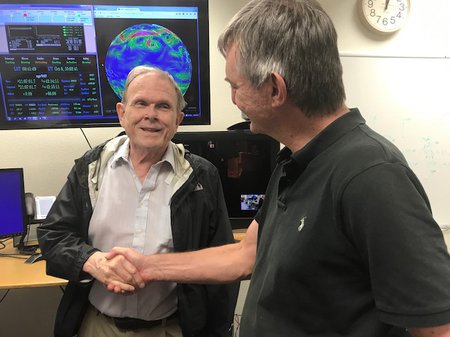 "The power of NIRES is that it can cover a whole spectral range simultaneously with one observation," said Keith Matthews, the instrument's principal investigator and chief instrument scientist at Caltech.

Matthews developed the instrument with the help of Tom Soifer, the Harold Brown Professor of Physics, Emeritus, at Caltech and member of the Keck Observatory Board of Directors; Jason Melbourne, a former postdoctoral scholar at Caltech; and Dae-Sik Moon of the University of Toronto, who is also associated with Dunlap Institute and started working on NIRES when he was a Millikan postdoctoral fellow at Caltech about a decade ago.

Because NIRES will be on the telescope at all times, its specialty will be capturing Targets of Opportunity (ToO)—astronomical objects that unexpectedly erupt. This capability is now more important than ever, especially with the recent discovery announced October 16, 2017, of gravitational waves caused by the collision of two neutron stars. For the first time in history, astronomers around the world detected both light and gravitational waves from a cosmic event, triggering a new era in astronomy.

"NIRES will be very useful in this new field of 'multi-messenger' astronomy," said Soifer. "NIRES does not have to be taken off of the telescope, so it can respond very quickly to transient phenomena. Astronomers can easily turn NIRES to the event and literally use it within a moment's notice."