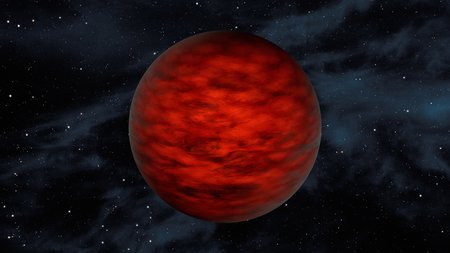 A young, free-floating world sits alone in space in this illustration. The object, called WISEA J114724.10?204021.3, is thought to be an exceptionally low-mass "brown dwarf," which is a star that lacked enough mass to burn nuclear fuel and glow like a star. Credit: NASA/JPL-Caltech
Tags:
astronomy & physics

In 2011, astronomers announced that our galaxy is likely teeming with free-floating planets. In fact, these lonely worlds, which sit quietly in the darkness of space without any companion planets or even a host sun, might outnumber stars in our Milky Way galaxy. The surprising discovery begged the question: Where did these objects come from? Are they planets that were ejected from solar systems, or are they actually light-weight stars called brown dwarfs that formed alone in space like stars?

A new study using data from NASA's Wide-field Infrared Survey Explorer (WISE) and the Two Micron All Sky Survey (2MASS) provides new clues in this mystery of galactic proportions. Scientists have identified a free-floating, planetary-mass object within a young star family. It is estimated to be between roughly five to 10 times the mass of Jupiter.

"We are at the beginning of what will become a hot field - trying to determine the nature of the free-floating population and how many are planets versus brown dwarfs," said co-author Davy Kirkpatrick of NASA's Infrared Processing and Analysis Center, or IPAC, at the California Institute of Technology in Pasadena.