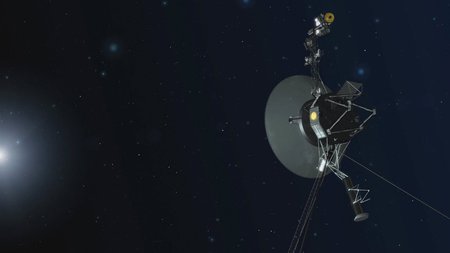 Humanity's farthest and longest-lived spacecraft, Voyager 1 and 2, achieve 40 years of operation and exploration this August and September. Despite their vast distance, they continue to communicate with NASA daily, still probing the final frontier. Their story has not only impacted generations of current and future scientists and engineers, but also Earth's culture, including film, art, and music. Each spacecraft carries a Golden Record of Earth sounds, pictures, and messages. Since the spacecraft could last billions of years, these circular time capsules could one day be the only traces of human civilization.

"None of us knew, when we launched 40 years ago, that anything would still be working, and continuing on this pioneering journey," said Ed Stone, Voyager project scientist at Caltech in Pasadena, California. "The most exciting thing they find in the next five years is likely to be something that we didn't know was out there to be discovered."

The Voyagers have set numerous records in their unparalleled journeys. In 2012, Voyager 1, which launched on Sept. 5, 1977, became the only spacecraft to have entered interstellar space. Voyager 2, launched on Aug. 20, 1977, is the only spacecraft to have flown by all four outer planets—Jupiter, Saturn, Uranus, and Neptune. Their numerous planetary encounters include discovering the first active volcanoes beyond Earth, on Jupiter's moon Io; hints of a subsurface ocean on Jupiter's moon Europa; the most Earth-like atmosphere in the solar system, on Saturn's moon Titan; the jumbled-up, icy moon Miranda at Uranus; and icy-cold geysers on Neptune's moon Triton.

Though the spacecraft have left the planets far behind—and neither will come remotely close to another star for 40,000 years—the two probes still send back observations about conditions where our sun's influence diminishes and interstellar space begins.