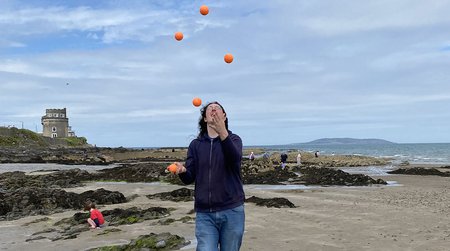 David Conlon, who is seen here juggling five balls, says that his favorite pastime "feels a lot like math, where you're often keeping many balls in the air at once." Credit: Caltech/David Conlon
Tags:
mathematics

David Conlon, a professor of mathematics who joined the Caltech faculty in 2019, grew up in rural Ireland, where his grandparents were farmers and his father was a policeman. As a kid, he says, he always enjoyed math but he did not realize he wanted to pursue a career in the discipline until he attended a major mathematics competition in Taiwan, the International Mathematical Olympiad, when he was about 15 years old.

"That was really the start," he says. "I never looked back from there."

Conlon, who specializes in combinatorics and number theory, earned his bachelor's degree in math from Trinity College Dublin in 2003 and his PhD from the University of Cambridge in 2009. He transferred to Caltech after serving as a professor at the University of Oxford from 2011 to 2019.

Conlon is perhaps most well known for his work in Ramsey theory, which is named after an early 20th-century British mathematician named Frank Plumpton Ramsey. A special case of Ramsey theory, sometimes called the "friends and strangers theorem," can be understood if you think about a room full of people. Some of the people might know each other and others will be strangers. What Ramsey proved is that, for a group of six people, there will always be at least three people who know each other, or at least three people who do not know each other (watch this explanatory video to better grasp the concept). In mathematical terms, this means that the Ramsey number of 3 is 6.

As the numbers grow higher, it becomes harder to pin down the Ramsey number. For example, the Ramsey number of 5 is only known to fall somewhere between 43 and 48. Early in his PhD work, Conlon made the first significant improvement on a general estimate for Ramsey numbers since 1935.

We recently connected with Conlon via Zoom to discuss Ramsey numbers and other mathematical problems that he is working on, and also to learn how he is passing time in quarantine (one distraction: juggling). Conlon is currently working remotely in Dublin, where he happened to be when the coronavirus pandemic struck.

What is it that appeals to you about Ramsey theory?

A lot of what we do in school and even college is calculations. You are basically taught a bunch of algorithms and you are trying to solve those algorithms. But as you evolve in the field of mathematics, you start to prove things. One of the things I came across very early in my training for the Mathematical Olympiad was Ramsey theory, which involves proofs. Ramsey theory is really about trying to show that any system contains very ordered subsystems. If you take any system whatsoever, then you can show that some small piece within it is very regular, very well behaved.

The example about the people in the room is a very commonly studied situation. There are loads of papers on this. We know that the Ramsey number of 3 is 6. That means that if you have six people in a room, you are guaranteed that at least three of them all know each other, or that at least three of the people are strangers. If you want to guarantee that at least four people all know each other or are strangers, you would need to have 18 people in the room. Or, in other words, the Ramsey number of 4 is 18. When you go up to the number 5, we no longer have an exact answer; the Ramsey number of 5 is between 43 and 48. The uncertainty just gets bigger and bigger from there. If you want to guarantee that you have a gathering containing 20 people who are friends or strangers, you would need to assemble more people than there are in the world.

Can you tell us more about the math problems you are working on now?

I'm still working on Ramsey numbers and trying to further reduce the uncertainty in the estimates. I made some progress in this field already, and shrunk the uncertainty. Essentially, the problem had stayed static since 1935 and I moved it for the first time. I'm also working on something we call books, which are a type of graph where you have connecting points and edges. About a year ago, I made a substantial step toward understanding these books, and this work might eventually improve the original question of Ramsey numbers even more.

A lot of what I work on stems from questions that originated with the polymath Paul Erdős. He would take the problems that other mathematicians would tell him about and then travel around the world and bring them to other people. He kept asking lots of questions, and I think he has more mathematical papers than anybody ever. One of the highest goals in my area is trying to solve these Erdős problems. I've solved several, but there are many more that I would still like to solve.

Are there any practical applications for your work?

The closest thing to potential applications for my work lies in theoretical computer science. A lot of the graph theory I work on is related to the vertices and connections of computer networks. Sometimes, I go to conferences with computer scientists. One program was about pseudo-randomness, which has to do with random-like objects that are produced by non-random means. They look random, but they're not actually random. Myself and a few other mathematicians were invited along with a fleet of computer scientists to try and align our different understandings of pseudo-randomness. At first blush, our notions of pseudo-randomness seem very, very different, but the computer scientists have made some major progress in Ramsey theory, on explicitly constructing Ramsey graphs. I'm hopeful that if we mathematicians could understand their work better, it could lead to exciting breakthroughs.

What do you see as the purpose of mathematics?

Numbers let us uncover the nature of the world. I have proved some things before and been surprised by the fact that they were true. Somehow the world had conspired to make this thing true. At the same time, a lot of what we do is cobbled together and the math is not always perfectly elegant. When I started my PhD, I was waiting for some miracle to pop out of the math and reveal a deep truth. But now it feels like we are building a house brick by brick. It takes time and effort.

How are you spending your time in quarantine in Dublin?

I'm working hard on finishing up several ongoing projects, but I'm punctuating the work with long walks through Dublin, especially down by the water in the evenings. I've also been practicing my juggling, which I've been doing since I was about 18. When you do 20 minutes a day, your skills start to accelerate. I'm up to five balls. Every time you add a ball, the whole arrangement becomes higher and faster, so you have to be much more precise in your throws. Sometimes it feels a lot like math, where you're often keeping many balls in the air at once.