More Clues in the Hunt for the Higgs 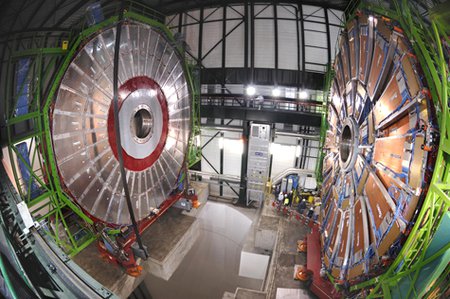 The CMS detector at the LHC weighs in at 14,000 metric tons. Credit: CERN
Tags:
astronomy & physics

PASADENA, Calif.—Physicists have announced that the Large Hadron Collider (LHC) has produced yet more tantalizing hints for the existence of the Higgs boson. The European Center for Nuclear Research (CERN) in Geneva, the international team of thousands of scientists—including many from the California Institute of Technology (Caltech)—unveiled for the first time all the data taken over the last year from the two main detectors at the LHC: the Compact Muon Solenoid (CMS) and ATLAS (A Toroidal LHC ApparatuS). The results represent the largest amount of data ever presented for the Higgs search.

The Higgs boson is a hypothesized particle that endows every other particle with mass, and is the presumed last piece of the so-called Standard Model, the theory that describes how every particle interacts. According to physicists, the discovery of the Higgs boson, in whatever form it may take, is crucial for understanding the fundamental laws of physics.

The team says they have seen what they call "excess events"—a slight surplus of particle-collision events over what would be expected if the Higgs didn't exist. This suggests that the particle might have a mass between 115 and 127 gigaelectron volts (GeV, a unit of mass; in comparison, the mass of a proton is about 1 GeV). While the physicists can't yet claim discovery of the elusive particle, they are closer than ever, having ruled out a very large range of the Higgs's possible masses with great certainty.

But if physicists do not find the Higgs in the remaining mass range between 115 and 127 GeV, then it means the particle—if it exists at all—is of a more exotic form, requiring new theories of physics. Although remarkably successful, the Standard Model is incomplete, and an exotic form of the Higgs could help point the way toward a more complete theory—which physicists say is an exciting challenge.

The LHC searches for the Higgs boson by slamming together protons at near-light speeds, producing new particles like the Higgs in the process. The problem is that the particle is exceptionally short-lived, decaying into other smaller particles within a tiny fraction of a second of its birth. To find the Higgs, physicists have to pick through the remains of each proton collision and reconstruct what happened.

If the collisions successfully produce a Higgs, then the particle can decay in several ways, depending on its mass. The Caltech team helped analyze three of these decays, called channels, in which the Higgs either decays into two photons, a pair of particles called W bosons, or another pair called Z bosons.

Graduate students Yong Yang, Yousi Ma, Jan Veverka, and Vladlen Timciuc are all studying the photon-photon channel, searching for the Higgs as well as possible signs of new physics phenomena. Caltech Tolman Postdoctoral Scholar Emanuele Di Marco, helped lead the analysis of the W-boson channel for the CMS team. Spiropulu, graduate student Chris Rogan, and other colleagues have also done preparatory studies for the Z-boson channel, which they published in the Physical Review in 2010.

"The impressive data produced by the CMS is the result of the experiment's ability to cleanly identify and precisely measure the energies of photons, electrons, and positrons," says Adi Bornheim, a Caltech staff scientist who heads the electromagnetic calorimeter (ECAL) detector group at CMS. Composed of 76,000 crystal detectors and weighing in at more than 90 tons, the calorimeter measures the energy of the electrons and protons produced by LHC collisions with high resolution.

"For the last 17 years, our group has led the way in constructing and calibrating the calorimeter, which has to be extremely precise for these demanding studies," adds Marat Gataullin, an assistant scientist at Caltech.

The collision experiments in 2010 and 2011 at the LHC operated only at half their designed energy levels, the researchers say. Still, the experiments exceeded design specifications for the proton beam's focus and intensity, producing about one quadrillion (a million billion) proton collisions and resulting in millions of gigabytes of data. Even though the latest experiments were more complicated than ever, the scientists in the ATLAS and CMS teams say they were able to analyze the data in record time, using new technology pioneered and developed by Newman's group at Caltech.

In order to confirm once and for all whether the Higgs exists as physicists understand it—or if they'll need to come up with new theories—the LHC will need be cranked up to collide protons with more energy. "We now need more data-three or four times the data that we expect the LHC to deliver in 2012," Newman says. The LHC is currently operating at around seven teraelectron volts (a TeV is a thousand times larger than a GeV), and scientists are considering boosting up the energy in the next year, which will help in the search. The LHC is designed to smash protons using energies as high as 14 TeV. "We foresee reaching 14 TeV by 2015, boosting the intensity by ten times starting in around 2022, and cranking up the energy to 33 TeV starting about 20 years from now," he adds. "This will open a vast new realm for exploration, and will surely revolutionize our understanding of the nature of matter and forces at the most basic level."

The Caltech CMS group, which includes eight graduate students and several postdocs, engineers, and technical staff, is working on many other projects in addition to the Higgs search, such as exploring supersymmetry (a theory that says every particle has a "supersymmetric" partner), searching for other exotic, theoretical particles, and developing new kinds of particle detectors.

"We're grateful for the achievements of the LHC team and our colleagues with CMS," Spiropulu says. "We are working hard on the final stage of improving the experiments and on publishing the results-both about the Higgs and possible new, exciting theories of physics-in the coming weeks and months."