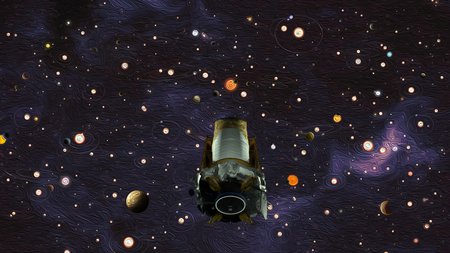 After nine years in deep space collecting data that indicate our sky to be filled with billions of hidden planets—more planets even than stars—NASA's Kepler space telescope has run out of fuel needed for further science operations. NASA has decided to retire the spacecraft within its current, safe orbit, away from Earth. Kepler leaves a legacy of more than 2,600 planet discoveries from outside our solar system, many of which could be promising places for life.

"As NASA's first planet-hunting mission, Kepler has wildly exceeded all our expectations and paved the way for our exploration and search for life in the solar system and beyond," said Thomas Zurbuchen, associate administrator of NASA's Science Mission Directorate in Washington. "Not only did it show us how many planets could be out there, it sparked an entirely new and robust field of research that has taken the science community by storm. Its discoveries have shed a new light on our place in the universe, and illuminated the tantalizing mysteries and possibilities among the stars."

Kepler has opened our eyes to the diversity of planets that exist in our galaxy. The most recent analysis of Kepler's discoveries concludes that 20 to 50 percent of the stars visible in the night sky are likely to have small, possibly rocky, planets similar in size to Earth, and located within the habitable zone of their parent stars. That means they're located at distances from their parent stars where liquid water—a vital ingredient to life as we know it—might pool on the planet surface.

Caltech's IPAC, a data and science center for astronomy, hosts the NASA Exoplanet Archive, which collects and serves important public data sets, including those from Kepler, that are involved in the search for and characterization of exoplanets and their host stars.