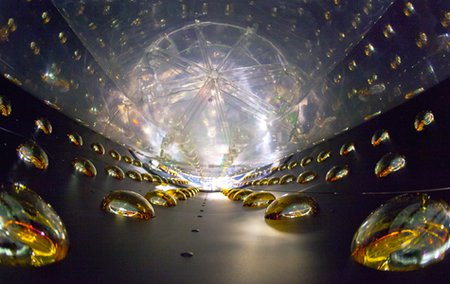 The innards of each cylindrical antineutrino detector are like a Russian doll, with one transparent acrylic vessel nested inside another one, both of which sit inside a third vessel made of stainless steel. When filled with clear liquid scintillator, the detectors will reveal antineutrino interactions by emitting very faint flashes of light. Sensitive photomultiplier tubes line the detector walls, ready to amplify and record the telltale flashes. Credit: Roy Kaltschmidt, Lawrence Berkeley National Roy Kaltschmidt, Lawrence Berkeley National Laboratory
Tags:
astronomy & physics

A new experiment that will answer fundamental questions about neutrinos, aiming to solve some of the biggest mysteries about the universe—why there's so much more matter than antimatter, for example—is now open for business. About two weeks ago, the Daya Bay Reactor Neutrino Experiment, lying underground in the mountains of southern China near Hong Kong, began taking data with its first set of twin detectors.

The start of the experiment is a culmination of six years of planning and construction, involving more than 200 scientists from around the world. "It's taken some time, but it's all coming together quite well," says Bob McKeown, professor of physics and the leader of the Caltech team involved in the project. "The detectors are performing extremely well. Everyone's very excited."

Neutrinos are uncharged particles, created in nuclear reactions such as those in the sun and in nuclear-power plants. Neutrinos zip through space at near the speed of light, hardly interacting with anything. In fact, billions of neutrinos are streaming through your body at this very second. About a dozen years ago, physicists discovered that neutrinos changed from one type, or "flavor," to another. Previously, physicists thought neutrinos are massless, but these transformations, called oscillations, mean that they actually do have a tiny amount of mass—they're about a million times less massive than an electron.

There are three flavors of neutrinos—muon, electron, and tau—and the way they transform into one another depends on three parameters called mixing angles. The Daya Neutrino Experiment will make the most precise measurement yet of the mixing angle called θ13, which describes how the electron neutrino transforms into the tau neutrino. The experiment will measure the electron antineutrinos—the antimatter counterpart of a neutrino—that are produced by the nuclear reactors in the nearby China Guangdong Nuclear Power Group.

Only two detectors are completed, but within the next year, McKeown says, the remaining six will be finished. Each detector is a 100-ton transparent cylinder filled with liquid, which will flash when antineutrinos strike and interact. Sitting below hundreds of feet of rock, the detectors are shielded from cosmic rays, which are a primary source of background noise. The detectors are also submerged in water in order to block out the radioactivity from the rock walls. Two miles of underground tunnels connect the detectors.

The Caltech team was in charge of designing and building the 24 calibration devices (three for each detector) that enable physicists to understand what the detectors will observe.

"Caltech has quite an important history working in this field," McKeown says. Nobel laureate Willy Fowler did some of the first calculations of solar neutrinos in the 1950s. In the 1980s, Felix Boehm studied antineutrinos produced in nuclear reactors. McKeown started his own research group after Boehm retired, working on the KamLAND experiment in Japan, which was one of the first experiments to conclusively observe neutrino oscillations.

Read more about the startup of the Daya Bay Reactor Neutrino Experiment here. Click through a slideshow of the facility here.