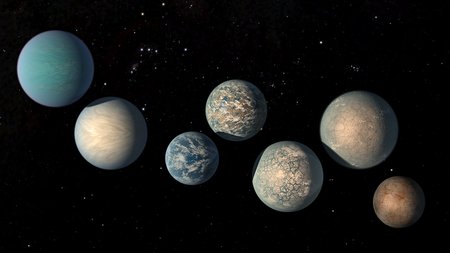 This illustration shows the seven Earth-size planets of TRAPPIST-1, an exoplanet system about 40 light-years away, based on data current as of February 2018. The image shows the planets' relative sizes but does not represent their orbits to scale. The art highlights possibilities for how the surfaces of these intriguing worlds might look based on their newly calculated properties. Credit: NASA/JPL-Caltech/R. Hurt, T. Pyle (IPAC) 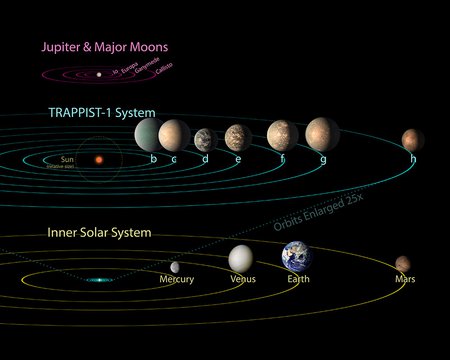 All seven planets discovered in orbit around the red dwarf star TRAPPIST-1 could easily fit inside the orbit of Mercury, the innermost planet of our solar system. In fact, they would have room to spare. TRAPPIST-1 also is only a fraction of the size of our sun; it isn't much larger than Jupiter. So, the TRAPPIST-1 system's proportions look more like Jupiter and its moons than those of our solar system. Credit: NASA/JPL-Caltech/R. Hurt, T. Pyle (IPAC) 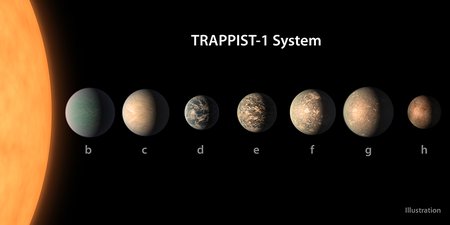 This artist's concept shows what the TRAPPIST-1 planetary system may look like, based on available data about the planets' diameters, masses, and distances from the host star, as of February 2018. This image represents an updated version of one originally created in 2017. Credit: NASA/JPL-Caltech/R. Hurt, T. Pyle (IPAC)
Tags:
astronomy & physics

The seven Earth-size planets of TRAPPIST-1 are all mostly made of rock, with some having the potential to hold more water than Earth, according to a new study published in the journal Astronomy and Astrophysics. The planets' densities, now known much more precisely than before, suggest that some planets could have up to 5 percent of their mass in water—which is 250 times more than the oceans on Earth.

The form that water would take on TRAPPIST-1 planets would depend on the amount of heat they receive from their star, which is a mere 9 percent as massive as our sun. Planets closest to the star are more likely to host water in the form of atmospheric vapor, while those farther away may have water frozen on their surfaces as ice. TRAPPIST-1e is the rockiest planet of them all, but still is believed to have the potential to host some liquid water.

"We now know more about TRAPPIST-1 than any other planetary system apart from our own," said Sean Carey, manager of the Spitzer Science Center at Caltech/IPAC in Pasadena, California, and co-author of the new study. "The improved densities in our study dramatically refine our understanding of the nature of these mysterious worlds."

Since the extent of the system was revealed in February 2017, researchers have been working hard to better characterize these planets and collect more information about them. The new study offers better estimates than ever for the planets' densities.