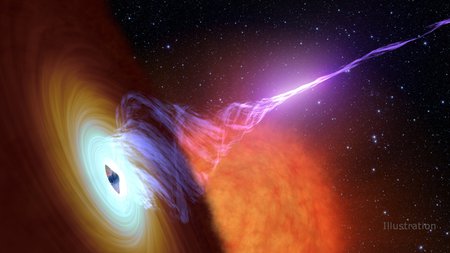 Black holes are famous for being ravenous eaters, but they do not eat everything that falls toward them. A small portion of material gets shot back out in powerful jets of hot gas, called plasma, that can wreak havoc on their surroundings. Along the way, this plasma somehow gets energized enough to strongly radiate light, forming two bright columns along the black hole's axis of rotation. Scientists have long debated where and how this happens in the jet.

Astronomers have new clues to this mystery. Using NASA's NuSTAR space telescope and a fast camera called ULTRACAM on the William Herschel Observatory in La Palma, Spain, scientists have been able to measure the distance that particles in jets travel before they "turn on" and become bright sources of light. This distance is called the "acceleration zone." The study is published in the journal Nature Astronomy.

"Global ground and space telescopes working together were key to this discovery. But this is only a peek, and much remains to be learned. The future is really bright for understanding the extreme physics of black holes," said Fiona Harrison, principal investigator of NuSTAR and the Benjamin M. Rosen Professor of Physics at Caltech.

NuSTAR is a Small Explorer mission led by Caltech and managed by JPL for NASA's Science Mission Directorate in Washington. NuSTAR was developed in partnership with the Danish Technical University and the Italian Space Agency (ASI). The spacecraft was built by Orbital Sciences Corp., Dulles, Virginia. NuSTAR's mission operations center is at UC Berkeley, and the official data archive is at NASA's High Energy Astrophysics Science Archive Research Center. ASI provides the mission's ground station and a mirror archive. Caltech manages JPL for NASA.