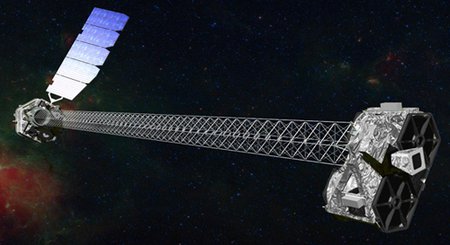 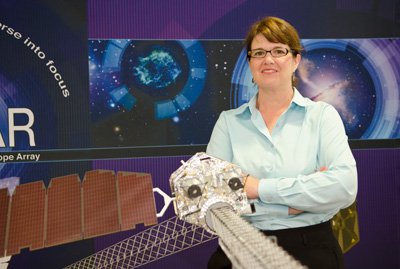 Fiona Harrison, professor of physics and astronomy at Caltech, is the principal investigator of the NuSTAR mission. Credit: Lance Hayashida
Tags:
astronomy & physics

This morning, NASA's NuSTAR telescope was launched into the low-Earth orbit from which it will begin exploring the high-energy X-ray universe to uncover the secrets of black holes, the dense remnants of dead stars, energetic cosmic explosions, and even our very own sun.

The space telescope—the most powerful high-energy X-ray telescope ever developed—rode toward its destination inside the nose of a Pegasus rocket strapped onto the belly of a "Stargazer" L-1011 aircraft. Around 9:00 a.m. (PDT), the plane—which had earlier taken off from the Kwajalein Atoll in the western Pacific—dropped the rocket from an altitude of 39,000 feet. The rocket was in free fall for about five seconds before the first of its three stages ignited, blasting NuSTAR into orbit around the equator.

"NuSTAR will open a whole new window on the universe by being the very first telescope to focus high-energy X rays," says Fiona Harrison, professor of physics and astronomy at Caltech and the principal investigator of the NuSTAR mission. The telescope is 100 times more sensitive than any previous high-energy X-ray telescope, and it will make images that are 10 times sharper than any that have been taken before at these energies, she says.

NuSTAR—short for "Nuclear Spectroscopic Telescope Array"—can make sensitive observations of cosmic phenomena at higher frequencies than other X-ray telescopes now in orbit, including NASA's Chandra X-Ray Observatory and the European Space Agency's XMM-Newton observatory. X rays are at the high-frequency end of the electromagnetic spectrum, and can be thought of as light particles called photons that carry a lot of energy. Chandra and XMM-Newton can detect X rays with energies up to about 10,000 electron volts (eV); NuSTAR will be able to see photons with energies up to 78,000 eV. By comparison, the energy of visible light is just a few eVs, while the X rays used to check for broken bones have energies on the order of hundreds of thousands of eVs.

High-energy X rays can penetrate skin and muscle because they carry so much energy. But that also means that they are hard to reflect. The mirrors in optical telescopes cannot be used to reflect and focus X rays. Instead, X-ray telescopes can only reflect incoming X rays at very shallow angles. These photons travel on paths that are almost parallel to the reflective surface, like rocks skipping on a pond. To reflect enough X rays for the detectors to observe, telescopes must use nested cylindrical shells that focus the photons onto a detector. Chandra has four such nested shells; XMM-Newton has 58. NuSTAR, in contrast, has 133, providing unprecedented sensitivity and resolution.

Each of NuSTAR's nested shells is coated with about two hundred thin reflective layers, some merely a few atoms thick, composed of either high-density materials, such as tungsten and platinum, or low-density materials like silicon and carbon. By alternating the two types of layers, NuSTAR's designers have produced a crystal-like structure that reflects high-energy X rays. Harrison and her group at Caltech started developing this technology more than 15 years ago and first tested it in a balloon experiment called the High-Energy Focusing Telescope (HEFT) in 2005.

A telescope focuses light by bending it so that it converges onto one spot—an eyepiece or a detector. But because X rays can only be reflected at such shallow angles, they do not converge very strongly. As a result, the distance between an X-ray telescope's mirrors and the detector must be especially long for the X rays to focus. Chandra is 45 feet long and XMM-Newton is about 30 feet long—as big as buses. NuSTAR—funded under NASA's Explorers program, which emphasizes smaller, cheaper missions that do science as efficiently as possible—has a deployable mast that allows it to squeeze inside the Pegasus rocket's roughly seven-foot-long payload compartment. About a week after launch, the mast will unfold and stretch to more than 30 feet.

This new technology, Harrison explains, "will allow NuSTAR to study some of the hottest, densest, and most energetic phenomena in the universe." Black holes are a key target of the telescope. Just 20 years ago, she says, black holes were thought to be rare and exotic, but "today we know that every galaxy has a massive black hole in its heart." Our own Milky Way galaxy, with a black hole four million times as massive as our sun, is no exception. Gas and dust block most of our view of the galactic center, but by observing in high-energy X rays, NuSTAR can peer directly into the heart of the Milky Way.

Disks of gas and dust surround many of the supermassive black holes of other galaxies. As the material spirals into these black holes, which are millions to billions of times as massive as the sun, the regions closest to the black hole radiate prodigious amounts of high-energy X rays, which are visible even if the black hole is hidden behind dust and gas. NuSTAR will therefore allow astronomers to not only conduct a census of all the black holes in the cosmic neighborhood, but also to study the extreme environments around the black holes. Astronomers will even be able to measure how fast black holes spin, which is important for understanding how they form and their role in the history and evolution of their host galaxies.

Astronomers will also point NuSTAR at supernovae remnants, the hot embers left over from exploded stars. After a star burns through all of its fuel, it blows up, blasting material out into space. In that explosion, new elements are formed (in fact, many of the heavier elements on Earth were forged long ago in stars and supernovae). Some newborn atoms are radioactive, and NuSTAR will be able to detect this radioactivity, allowing astronomers to probe what happens during the fiery death of a star.

The telescope also will devote some time to the observation of our own star, the sun. The outer layer of the sun, called the corona, burns at millions of degrees. Some scientists speculate that nanoflares—smaller versions of the solar flares that occasionally erupt from the solar surface—keep the corona hot. NuSTAR may be able to see nanoflares for the first time. "In a few hours of observations, NuSTAR will answer this longstanding question that solar physicists have been scratching their heads about for years," says Daniel Stern of NASA's Jet Propulsion laboratory, NuSTAR's project scientist.

The NuSTAR mission is led by Caltech and managed by JPL for NASA.