Physicists Close in on a Rare Particle-Decay Process

Underground Experiment May Unlock Mysteries of the Neutrino 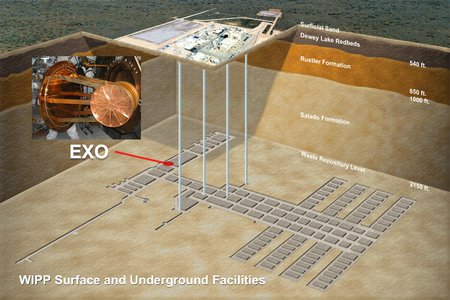 The Enriched Xenon Observatory 200 (EXO-200) is a neutrino experiment housed 2150 feet below ground in a salt basin at the Waste Isolation Pilot Plant (WIPP). The subterranean location isolates it from cosmic rays and other sources of natural radioactivity. Credit: EXO/WIPP/SLAC
Tags:
astronomy & physics

PASADENA, Calif.—In the biggest result of its kind in more than ten years, physicists have made the most sensitive measurements yet in a decades-long hunt for a hypothetical and rare process involving the radioactive decay of atomic nuclei.

If discovered, the researchers say, this process could have profound implications for how scientists understand the fundamental laws of physics and help solve some of the universe's biggest mysteries—including why there is more matter than antimatter and, therefore, why regular matter like planets, stars, and humans exists at all.

The experiment, the Enriched Xenon Observatory 200 (EXO-200), is an international collaboration that includes the California Institute of Technology (Caltech) and is led by Stanford University and the SLAC National Accelerator Laboratory, a U.S. Department of Energy (DOE) National Laboratory.

The EXO-200 experiment has placed the most stringent constraints yet on the nature of a so-called neutrinoless double beta decay. In doing so, physicists have narrowed down the range of possible masses for the neutrino, a tiny uncharged particle that rarely interacts with anything, passing right through rock, people, and entire planets as it zips along at nearly the speed of light.

The collaboration, consisting of 80 researchers, has submitted a paper describing the results to the journal Physical Review Letters.

In a normal double beta decay, which was first observed in 1986, two neutrons in an unstable atomic nucleus turn into two protons; two electrons and two antineutrinos—the antimatter counterparts of neutrinos—are emitted in the process.

But physicists have suggested that two neutrons could also decay into two protons by emitting two electrons without producing any antineutrinos. "People have been looking for this process for a very long time," says Petr Vogel, senior research associate in physics, emeritus, at Caltech and a member of the EXO-200 team. "It would be a very fundamental discovery if someone actually observes it."

A neutrino is inevitably produced in a single beta decay. Therefore, the two neutrinos that are produced in a neutrinoless double beta decay must somehow cancel each other out. For that to happen, physicists say, a neutrino must be its own antiparticle, allowing one of the two neutrinos to act as an antineutrino and annihilate the other neutrino. That a neutrino can be its own antiparticle is not predicted by the Standard Model—the remarkably successful theory that describes how all elementary particles behave and interact.

If this neutrinoless process does indeed exist, physicists would be forced to revise the Standard Model.

The process also has implications for cosmology and the origin of matter, Vogel says. Right after the Big Bang, the universe had the same amount of matter as antimatter. Somehow, however, that balance was tipped, producing a slight surplus in matter that eventually led to the existence of all of the matter in the universe. The fact that the neutrino can be its own antiparticle might have played a key role in tipping that balance.

In the EXO-200 experiment, physicists monitor a copper cylinder filled with 200 kilograms of liquid xenon-136, an unstable isotope that, theoretically, can undergo neutrinoless double beta decay. Very sensitive detectors line the wall at both ends of the cylinder. To shield it from cosmic rays and other background radiation that may contaminate the signal of such a decay, the apparatus is buried deep underground in the DOE's Waste Isolation Pilot Plant in Carlsbad, New Mexico, where low-level radioactive waste is stored. The physicists then wait to see a signal.

The process, however, is very rare. In a normal double beta decay, half of a given sample would decay after 1021 years—a half-life roughly 100 billion times longer than the time that has elapsed since the Big Bang.

One of the goals of the experiment is to measure the half-life of the neutrinoless process (if it is discovered). In these first results, no signal for a neutrinoless double beta decay was detected in almost seven months' of data—and that non-detection allowed the researchers to rule out possible values for the half-life of the neutrinoless process. Indeed, seven months of finding nothing means that the half-life cannot be shorter than 1.6 × 1025 years, or a quadrillion times older than the age of the universe. With the value of the half-life pinned down, physicists can calculate the mass of a neutrino—another longstanding mystery. The new data suggest that a neutrino cannot be more massive than about 0.140 to 0.380 electron volts (eV, a unit of mass commonly used in particle physics); an electron, by contrast, is about 500,000 eV, or about 9 × 10-31 kilograms.

More than ten years ago, the collaboration behind the Heidelberg-Moscow Double Beta Decay Experiment controversially claimed to have discovered neutrinoless double beta decay using germanium-76 isotopes. But now, the EXO-200 researchers say, their new data makes it highly unlikely that those earlier results were valid.

The EXO-200 experiment, which started taking data last year, will continue its quest for the next several years.