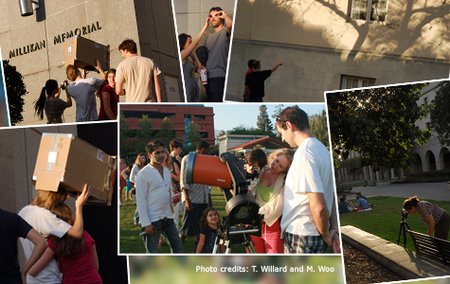 Sunday evening's solar eclipse dazzled hundreds of sun gazers who gathered on Caltech's campus to watch the rare alignment, a partial annular "ring of fire" solar eclipse that wowed spectators around the world.

In an event organized by the Caltech Astronomy Outreach group, more than 600 members of the Caltech and surrounding communities converged on the athletics field, said graduate student and group member Ben Montet. "It was a phenomenal success," he said. "It exceeded our expectations."

Others watched the eclipse through the solar telescope in the Linde + Robinson Laboratory for Global Environmental Science. Some just fashioned their own eclipse viewers out of cardboard boxes and watched from outside Millikan Library.

For the public event on the athletics field, the outreach group handed out more than 300 pairs of protective glasses for people to view the eclipse. Two telescopes were also available for viewers to take a closer look, and graduate student and faculty volunteers were on hand to answer questions

In Los Angeles, about 80 percent of the sun's area became covered, dimming the sunlight and cooling the air. The next similarly dramatic eclipse will not happen over the Los Angeles area until 2071, so for many viewers, Sunday's eclipse was a once-in-a-lifetime experience.

"It was far more beautiful than I expected—it was amazing," said Vinayak Bharne, a Pasadena resident who came to the event with his wife and two children.

After the family looked through the telescope, Paige Bharne held her five-year-old son, Sebastian, who tried to make his own eclipse by blocking the sun with his head. "This is the best time ever," he said.

The outreach group is motivated by sharing the joys of astronomy with members of the community, said graduate student Varun Bhalerao. Caltech astronomy outreach is primarily a graduate student effort, with significant involvement from postdocs, staff, and other members of the Caltech community. Their other recent activities include talking about astronomy at local schools and organizing classroom visits to the Cahill Center for Astronomy and Astrophysics.

For more information about the outreach group, visit www.astro.caltech.edu/outreach. You can also follow them on Twitter: @CaltechAstro.