Spirals of Light May Lead to Better Electronics 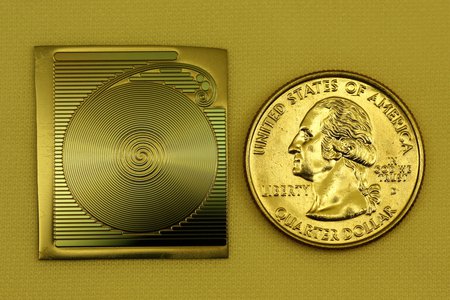 A photograph of the spiral chip-based optical resonator developed at Caltech, shown next to a quarter to provide scale. Credit: Hansuek Lee/Caltech
Tags:
astronomy & physics

A group of researchers at the California Institute of Technology (Caltech) has created the optical equivalent of a tuning fork—a device that can help steady the electrical currents needed to power high-end electronics and stabilize the signals of high-quality lasers. The work marks the first time that such a device has been miniaturized to fit on a chip and may pave the way to improvements in high-speed communications, navigation, and remote sensing.

"When you're tuning a piano, a tuning fork gives a standardized pitch, or reference sound frequency; in optical resonators the 'pitch' corresponds to the color, or wavelength, of the light. Our device provides a consistent light frequency that improves both optical and electronic devices when it is used as a reference," says Kerry Vahala, Ted and Ginger Jenkins Professor of Information Science and Technology and Applied Physics. Vahala is also executive officer for applied physics and materials science and an author on the study describing this new work, published in the journal Nature Communications.

A good tuning fork controls the release of its acoustical energy, ringing just one pitch at a particular sound frequency for a long time; this sustaining property is called the quality factor. Vahala and his colleagues transferred this concept to their optical resonator, focusing on the optical quality factor and other elements that affect frequency stability.

The researchers were able to stabilize the light's frequency by developing a silica glass chip resonator with a specially designed path for the photons in the shape of what is called an Archimedean spiral. "Using this shape allows the longest path in the smallest area on a chip. We knew that if we made the photons travel a longer path, the whole device would become more stable," says Hansuek Lee, a senior researcher in Vahala's lab and lead author on the paper.

Frequency instability stems from energy surges within the optical resonator—which are unavoidable due to the laws of thermodynamics. Because the new resonator has a longer path, the energy changes are diluted, so the power surges are dampened—greatly improving the consistency and quality of the resonator's reference signal, which, in turn, improves the quality of the electronic or optical device.

In the new design, photons are applied to an outer ring of the spiraled resonator with a tiny light-dispensing optic fiber; the photons subsequently travel around four interwoven Archimedean spirals, ultimately closing the path after traveling more than a meter in an area about the size of a quarter—a journey 100 times longer than achieved in previous designs. In combination with the resonator, a special guide for the light was used, losing 100 times less energy than the average chip-based device.

In addition to its use as a frequency reference for lasers, a reference cavity could one day play a role equivalent to that of the ubiquitous quartz crystal in electronics. Most electronics systems use a device called an oscillator to provide power at very precise frequencies. In the past several years, optical-based oscillators—which require optical reference cavities—have become better than electronic oscillators at delivering stable microwave and radio frequencies. While these optical oscillators are currently too large for use in small electronics, there is an effort under way to miniaturize their key subcomponents—like Vahala's chip-based reference cavity.

"A miniaturized optical oscillator will represent a shift in the traditional roles of photonics and electronics. Currently, electronics perform signal processing while photonics rule in transporting information from one place to another over fiber-optic cable. Eventually, oscillators in high-performance electronics systems, while outwardly appearing to be electronic devices, will internally be purely optical," Vahala says.

"The technology that Kerry and his group have introduced opens a new avenue to move precision optical frequency sources out of the lab and onto a compact, robust and integrable silicon-based platform," says Scott Diddams, physicist and project leader at the National Institute of Standards and Technology, recent Moore Distinguished Scholar at Caltech and a coauthor on the study. "It opens up many new and unexplored options for building systems that could have greater impact to 'real-world' applications," Diddams says.

The paper, titled "Spiral resonators for on-chip laser frequency stabilization," was published online in Nature Communications on September 17. Other Caltech coauthors on the study include graduate students Myoung Gyun Suh and Tong Chen (PhD '13), and postdoctoral scholar Jiang Li (PhD '13). The project was in collaboration with Caltech startup company hQphotonics. This work was funded by the Defense Advanced Research Projects Agency; the Caltech's Kavli Nanoscience Institute; and the Institute for Quantum Information and Matter, an NSF Physics Frontiers Center with support of the Gordon and Betty Moore Foundation.