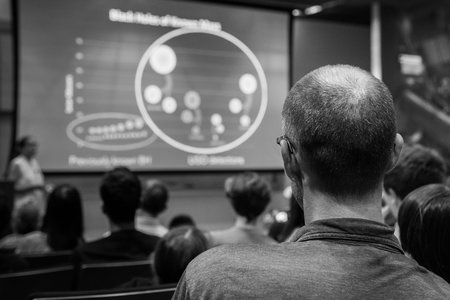 Once a month, members of the public are invited to Caltech for a free lecture on astronomy in Hameetman Auditorium, followed by a guided stargazing session on the North Field. Cameron Hummels, a postdoctoral scholar in theoretical astrophysics, who has been organizing these events for the last four years, knows they were popular since the auditorium regularly fills to, and sometimes beyond, capacity. He also knows he could be reaching a wider audience.

"As we know, L.A. has a huge diversity of people," he says, "and many don't speak English natively. The two largest populations of non-English speakers in the area are Spanish and Mandarin Chinese, so we're trying to adapt our events to reach those audiences."

To that end, on Friday, February 28 at 7 p.m., the local community is invited to a Spanish language stargazing lecture by Research Assistant Professor of Physics Javier Garcia followed by a panel discussion featuring astrophysics postdoc Lluis Mas-Ribas (who will also serve as MC for the event); Sergio Fajardo-Acosta, a staff scientist at IPAC; and Solange Ramirez, a project manager at the Carnegie Observatories.

"Informing, educating, raising passion for science-related topics is our duty, and it is something that I value a lot," says Garcia, whose talk is titled "De los Atomos a los Agujeros Negros" (From Atoms to Black Holes). "But of course, it is much more meaningful for me to be able to give this talk in my mother tongue and connect directly with the Latino community in the area. I think the fact that it will be in Spanish makes that connection a lot stronger, and my hope is that it reaches a new demographic of people who otherwise perhaps would have not felt compelled to participate in this event."

Hummels is also planning a Mandarin-language version of the popular Astronomy on Tap outreach program he also organizes. The program, which includes a science talk, trivia quizzes, and lively discussion, is usually held in a Pasadena pub. The Mandarin-language Astronomy on Tap will be held at the Mt. Lowe Brewing Company, a venue in the San Gabriel Valley town of Arcadia.

As with the Spanish-language stargazing lecture, says Hummels, "this gives us an opportunity to engage a completely different audience."