Stars Around the Milky Way: Cosmic Space Invaders or Victims of Galactic Eviction? 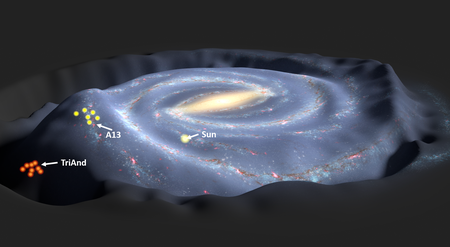 The Milky Way galaxy, perturbed by the tidal interaction with a dwarf galaxy, as predicted by N-body simulations. The locations of the observed stars above and below the disk, which are used to test the perturbation scenario, are indicated. Credit: T. Mueller/C. Laporte/NASA/JPL-Caltech
Tags:
astronomy & physics

An international team of astronomers led by the Max Planck Institute for Astronomy (MPIA) has made a surprising discovery about the birthplace of groups of stars located in the halo of the Milky Way galaxy.

These halo stars are grouped together in giant structures that orbit the center of the galaxy, above and below the flat disk of the Milky Way. Researchers thought the stars might have formed from debris left behind by smaller galaxies that invaded the Milky Way in the past.

But in a study published February 26 in the journal Nature, astronomers now reveal compelling evidence showing that some of these halo structures actually originate from the Milky Way's disk itself. The observations were made using the W. M. Keck Observatory on Maunakea, Hawaii.

"This phenomenon is called galactic eviction," says co-author Judy Cohen, the Kate Van Nuys Page Professor of Astronomy at Caltech. "These structures are pushed off the plane of the Milky Way when a massive dwarf galaxy passes through the galactic disk. This passage causes oscillations, or waves, that eject stars from the disk, either above or below it depending on the direction that the perturbing mass is moving."

"The oscillations can be compared to sound waves in a musical instrument," says lead author Maria Bergemann of MPIA, who works in the field of galactoseismology, which models the history of interactions between our galaxy and its satellite galaxies. "We now have the clearest evidence for these oscillations in our galaxy's disk obtained so far!"

As a next step, the astronomers plan to analyze additional stars, including those in other stellar structures farther away from the disk. They also plan to determine the masses and ages of these stars in order to pin down the time limits of when this galactic eviction took place.