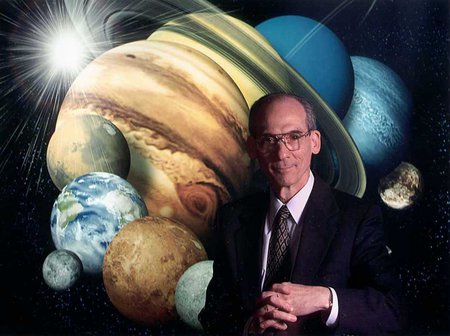 Edward C. Stone, the David Morrisroe Professor of Physics and vice provost for special projects at the California Institute of Technology (Caltech), has been awarded a NASA Distinguished Public Service Medal. The medal was presented to Stone by television personality Stephen Colbert on the December 3 broadcast of The Colbert Report.

Stone appeared on the program to discuss NASA's Voyager mission. Since their launch in 1977, the twin Voyager spacecraft, Voyager 1 and Voyager 2, have explored the outer planets of our solar system, greatly expanding our knowledge of Jupiter, Saturn, Uranus, and Neptune. Stone and the Voyager team recently confirmed that Voyager 1, the farthest-traveled object built by humans, had crossed into interstellar space. During his interview with Colbert, Stone answered questions about the past, present, and future of the Voyager mission.

Explaining the significance of Voyager to Colbert's audience, Stone said, "This really is a first step for our human journey beyond Earth, and beyond in fact the planets and into interstellar space, and these two spacecraft, now, will be in orbit around the center of our galaxy for billions of years."

What came at the close of the program, however, was a surprise even to Stone: Colbert drifted on stage in a spacesuit costume right out of a 1950s sci-fi movie and presented Stone with the medal.

"I was completely taken by surprise when Stephen Colbert handed me the medal," says Stone. "It's an honor for anyone to receive such an award from NASA, but to have it delivered this way was really extraordinary."

The Distinguished Public Service Medal is NASA's highest honor for a nongovernment individual. Stone was recognized "for a lifetime of extraordinary scientific achievement and outstanding leadership of space science missions, and for his exemplary sharing of the exciting results with the public," according to the award citation.

Stone joined the Caltech faculty in 1967. He became the project scientist for the Voyager mission in 1972 and has held that position to the present day. Stone served as director of the Jet Propulsion Laboratory, which is managed for NASA by Caltech, from 1991 to 2001. He is currently vice chair of the board of directors of the Thirty Meter Telescope project.